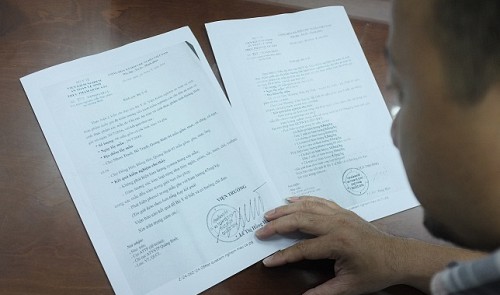 A lack of consistency in seafood samples taken from central Vietnam seawater since mass fish deaths hit the region earlier this year has left many concerned about seafood safety there.

A report submitted by the National Institute for Food Control (NIFC) to the Ministry of Health shows that six out of nine seafood samples collected from the central coastline were discovered containing excessive amounts of phenol, cyannual, and cadmium, a heavy metal substance.

According to the NIFC, out of the nine fish samples retrieved on August 5 from the coastal area around Ha Tinh Province’s Ky Anh and Cam Xuyen Districts, one contained high cadmium levels, about 0.079 milligrams per one kilogram of fish, and six others were found with excessive phenol and cyannual.

Meanwhile, the Agency of Food Safety under the Ministry of Healthtold Tuoi Tre (Youth) newspaper on Tuesday that testing throughout August confirmed that only one out of every 18 samples contained high levels of cadmium.

Responding to the inconsistent results, a representative from the Agency of Food Safety stated that the new findings by the NIFC were only recently updated.

Similar inconsistencies have also been recorded on various testing done since the beginning of the mass fish deaths in April.

Accordingly, the Ministry of Health announced in late May that 97 out 140 fish, salt, and water samples taken from the impacted coast areas did not include excessive toxins.

In more recent reports, the ministry stated that over 430 seafood samples collected in April and May were discovered with high amounts of heavy metals including iron, lead, and chromium.

Seafood contamination in central Vietnam is believed to have started after massive numbers of dead fish washed ashore in Ha Tinh, Quang Binh, Quang Tri, and Thua Thien-Hue in April 2016.

By late June, local and international scientists had concluded that wastewater from the Vietnamese steel-making subsidiary of Taiwan’s Formosa Plastics Group was responsible for the environmental disaster.

The Ministry of Natural Resources and Environment asserted at a conference on Monday that most, but not all of the central waters, are now safe for swimming and fishing activities.

However, the overall edibility of seafood from the region remains unclear, with local fishermen concerned for their livelihoods.

The lack of consistent test results has left a hung jury on fish safety in the region and local authorities are uncertain of what to do with local seafood.

Nguyen Huu Hoai, chairman of the Quang Binh People’s Committee, said hundreds of metric tons of frozen fish have been put in storage with unclear plans for their fate.

Meanwhile, the Quang Tri administration has announced that it will dispose of 60 frozen seafood bought from local fishermen between late April and May due to low salability.