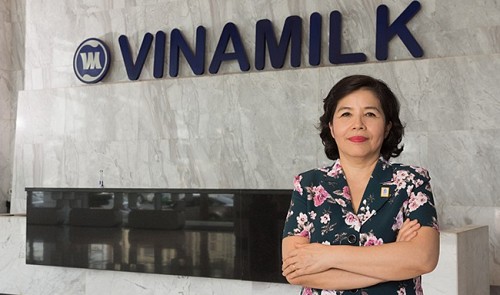 A Vietnamese company has finally been able to rub shoulders with other regional enterprises in Forbes Asia’s Fabulous 50 List, which honors the best publicly traded big companies in the Asia-Pacific region.

Forbes hailed the presence of Vietnam Dairy Products JSC, or Vinamilk, as “the big news” for Asia's Fab 50 List this year, now in its 12th edition.

“[Vietnam] never placed a company in the Fab 50, but this year Vietnam Dairy Products breaks the ice,” the magazine said on August 24.

Forbes said there are a total of 21 new entrants to this year’s list, and the Vietnamese dairy behemoth totally deserves it.

“It is also the country’s first stock market heavyweight to lift itsforeign ownership limit past 49 percent, which helped push its share price up 20 percent from July 1 through August 19.”

Vinamilk’s products have now reached 43 countries, with US$250 to $270 million in total export revenue, according to data gathered byTuoi Tre (Youth) newspaper. The company’s CEO, Mai Kieu Lien, has set a goal to become one of the top 50 global dairy firms in the next three years.

In making Asia's Fab 50 List, Forbes started with a pool of 1,524 public companies that have at least $1.7 billion in annual revenue. Private companies, such as China’s high-performing Huawei Technologies, are not included, the magazine noted.

Those companies that are losing money or whose revenue is less than it was five years ago and those that have more than 50 percent state-ownership were then knocked out, according to Forbes.

“The goal is to highlight entrepreneurial outfits, not ones living off government connections,” Forbes explained.

“Finally we run the remaining contenders through a battery of more than a dozen financial measures.”