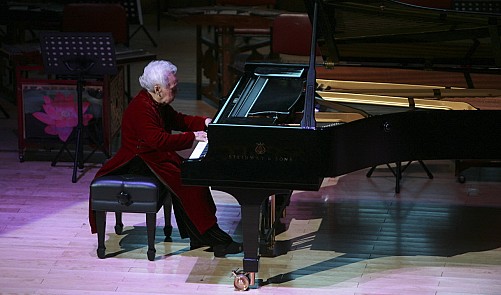 Ninety-nine-year-old pianist Thai Thi Lien gave the audience in Hanoi a performance to remember on the weekend, as she gracefully recited two classical pieces by Polish composer Frédéric Chopin.

The performance was part of a concert put together by the Hanoi Conservatory of Music in commemoration of its 60th anniversary.

The 99-year-old grandmother had the auditorium in complete silence before breaking into a standing ovation on Saturday as she recited two classical pieces by 19th-century Polish composer Frédéric Chopin with grace and passion.

Lien was born in then-Cho Lon City (now part of Ho Chi Minh City) to an educated Christian family, and was introduced to the piano at the age of four from the encouragement of her father, who later afforded her piano training at the Conservatoire de Paris when she was 16.

In 1948, Lien and her first husband moved to live in the Czechoslovakian capital of Prague, where she earned her bachelor’s degree at the Prague Conservatory, being one of the first Vietnamese to do so.