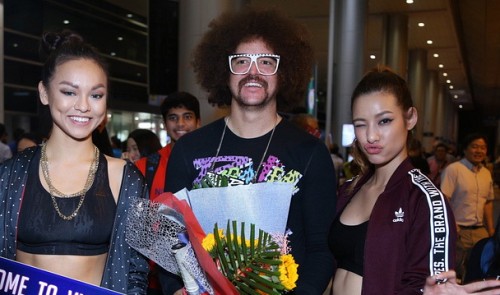 LMFAO singer Redfoo to perform in Vietnam this weekend

Redfoo, half of the U.S. electronic dance music duo LMFAO, will perform in Ho Chi Minh City this Saturday at the 2016 Yan Beatfest outdoor music event alongside other international and local artists.

The annual music festival, organized by entertainment and event planning corporation Yan Live, will return to Ho Chi Minh City for a one-night event on Saturday at Phu Tho Stadium in District 10.

The festival, themed ‘Music Laboratory’, promises “more unique dance and music performances on stage” and will feature Redfoo, a founding member and lead singer from the electro-house duo LMFAO.

Redfoo will be heating up the stage with his most popular hits including LMFAO’s 2011 hit song Party Rock Anthem, Sexy and I know it, Booty Man, and Champagne Showers.

The American singer will be accompanied by Vietnamese DJs and pop stars.

Previous editions of the music festival have featured English singer Shayne Ward and American singer Demi Lovato, who performed at the first and second editions of Yan Beatfest in 2014 and 2015, respectively.