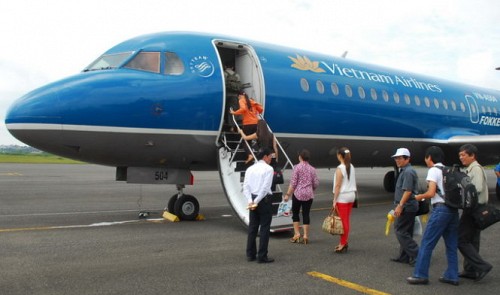 A Chinese passenger was caught red-handed attempting to steal from carry-on luggage belonging to another flyer, making it the second case to be reported on Thursday and one of many from the past month.

Min Li Yong, a Chinese national aboard Vietnam Airlines flight VN107 flying from central city of Da Nang to Ho Chi Minh City on Thursday was attempting to cut his way into another passenger’s suitcase using a pocket knife attached to his nail clipper when a flight attendant spotted the would-be thief.

A vigilant flight attendant filmed the entire incident and submitted it, along with a case report, to competent authorities.

Earlier the same day, Wang Qingjian, another Chinese national, was arrested after he was caught stealing over VND400 million ($17,588) in cash from on-board luggage belonging to a Vietnamese flyer and hiding it in his own suitcase.

On November 17, Yang Yong, also Chinese, was caught rummaging through a bag belonging to N.T.H. aboard flight VN 164 from Da Nang to Hanoi.

The bag contained two Sony cameras and an envelope with VND5 million ($220) inside.

The owner then realized VND15.5 million ($681) had disappeared from his bag before the money was discovered concealed in a toilet at the airport.

According to Phan Ngoc Linh, director of the Tan Son Nhat Operation Center of national carrier Vietnam Airlines, all cabin crews have been instructed to be on the lookout for similar incidents.

Flight stewards have also been requested to film any theft taking place on the planes to facilitate any necessary police investigations, the official stated.