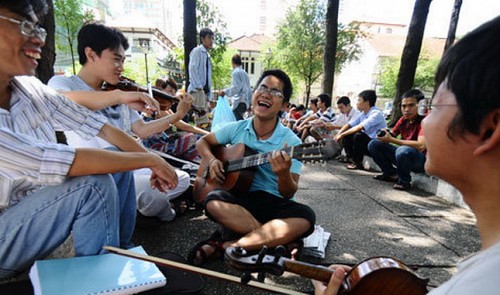 A proposal to open music streets in downtown Ho Chi Minh City was made by the District 1 administration during a meeting with the city’s chairman on Wednesday.

The proposal calls for music streets to be located on the parallel Han Thuyen and Alexandre de Rhodes streets.

The streets are located near a number of the city’s landmark sites such as the Reunification Palace, the Saigon Central Post Office, and the Saigon Notre-Dame Cathedral Basilica.

They also border April 30 Park, a popular weekend rendezvous amongst the city’s youth and expat community, who go there to enjoy a take-away cup of iconic Saigonese iced coffee with condensed milk while listening to live music performances from amateur artists.

The proposal by District 1’s administration was positively received by Nguyen Thanh Phong, chairman of the Ho Chi Minh City People’s Committee, who asked for a more detailed plan as soon as possible.

A proposal to open a weekend food fair at Bach Dang Park, which runs along the Saigon River in District 1, was also submitted to the city’s chairman at Wednesday’s meeting, which focused on a renewed socio-economic vision of the district in 2017.

The food fair aims to serve as a platform to promote Vietnamese cuisines to international friends, and is expected to improve the appeal of the city’s downtown area while boosting its commercial and service industries.

District 1 has set a goal to achieve a state budget revenue of over VND13 trillion (US$580.36 million) in 2017 and facilitate the transition of 300 local household businesses with yearly profits above VND4 billion ($178,571) into companies.

In his directive remarks, chairman Phong demanded a more intensive crackdown on unlicensed bus services and stations in the district, as well as the widespread encroachment of sidewalks by street vendors.

​​Why do Vietnamese drink so much?

In Vietnam, a 330ml can of beer fetches only half a dollar