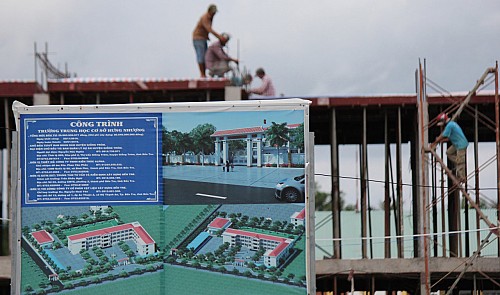 Recent efforts by Vietnamese authorities to prevent the illegal exploitation of sand has resulted in a surge in sand prices, impacting small-scale constructions and major state-owned projects alike.

Following the central government’s direction to cease granting new permits or renewing existing ones for sand mining activities in local rivers, the price of sand in the Mekong Delta has increased by 40 to 50 percent.

In Can Tho City, local residents have raised concerns that the price hike has negatively impacted the construction of their homes.

Truong, one local contractor, complained that he had already signed deals to build multiple homes in the neighborhood.

The new sand prices have changed his original financial plans, Truong said, adding that he had been unable to renegotiate with clients.

The transportation cost from sand mines to Can Tho is also now VND80,000 ($3.53) per cubic meter, another threefold increase.

Meanwhile, Nguyen Van Noi, owner of a building supplies shop in Bac Lieu Province, said that sand is constantly out of stock at the facility.

A similar situation exists in Soc Trang Province, where the cost of sand has also risen by two to three times its previous price.

Insiders predict that prices will continue to soar over the coming days given limited supply and high demand.

The private sector is not the only part of the economy impacted by this sudden change of fortunes in the sand market, with many state-owned projects delayed because of the sudden shortage.

Nguyen Van Be, chairman of the People’s Committee in Giong Tom District, Ben Tre Province, said at the conference that some 21 constructions financed by government bonds in the district have been challenged by the issue.

Some of the projects were signed a few years ago when sand was offered at a much cheaper price, Be continued.

Only two out of 20 sand mines in Ben Tre are currently allowed to operate legally, resulting in a drastic drop in supply during a period when demand for the building material is high.

According to Duong Quoc Viet, director of the Department of Construction in Soc Trang Province, construction companies are even hesitant to continue projects or sign new deals, preferring to wait for sand prices to reduce.

The situation has been exacerbated by the fact that local retailers are profiting from the continued high demand by increasing prices.

Local authorities have been urged to take measures to control the situation.

“Punishments must be imposed upon those companies and shops that take advantage of the issue and contribute to an unstable market,” Viet asserted.