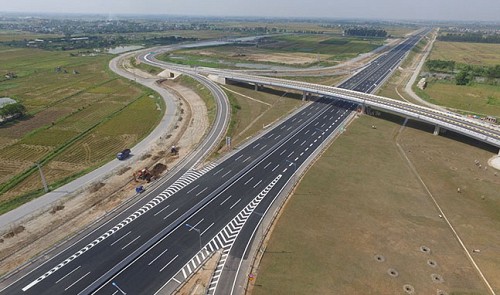 Why the costs to build expressways in Vietnam are at least twice higher than those in other countries was among the questions brought to the ministers of transport and investment at a Q&A session of the lawmaking National Assembly on Thursday.

The morning session of the Q&A, held during the ongoing third plenum of Vietnam’s legislature in Hanoi, saw lawmakers raising questions to Minister of Transport Truong Quang Nghia and Minister of Planning and Investment Nguyen Chi Dung.

Le Cong Nhuong, a deputy from the south-central province of Binh Dinh, asked the minister of investment to explain why a proposed expressway, running 1,370km north-to-south, may cost as much as US$14 billion to develop.

“So the cost for a four-lane expressway in our country is two to four times higher than that in other countries, whereas its quality may be lower,” Nhuong said.

The Binh Dinh lawmaker added that Vietnam needs an average of $50 million to develop one kilometer of a high-speed railway route, which is 2.5 times higher than what it is in Thailand.

“In light of Vietnam’s tight state budget, what you [as the investment minister] would do to reduce the development expenditures for expressways and high-speed railways?” he questioned.

As suggested by the National Assembly chairwoman Nguyen Thi Kim Ngan, Transport Minister Nghia answered the question on behalf of his investment counterpart.

Nghia said the cost to build expressways depends on several factors, such as geographic conditions and construction materials.

“The average investment for expressways varies in all countries,” he said.

“The figure for Vietnam as per our estimation is $9.5 million per km,” he concluded, implying that it is not as costly to develop expressways in Vietnam as lawmakers and voters concern.

Nghia did not mention the expenses to build high-speed railways.