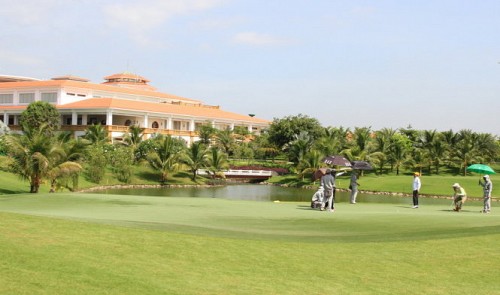 Members of the public have been wondering who the real owner of the headline-grabbing Tan Son Nhat Golf Course is.

Developed by the Hanoi headquartered LOBICO, the course is situated on a 157 hectare property adjacent to the city’s Tan Son Nhat international airport, and is now accused of hindering its expansion.

LOBICO was founded in 2006 with Ministry of National Defense-run development company, Truong An Development and Investment construction JSC, among its shareholders.

However, according to data reviewed by Tuoi Tre (Youth) newspaper, by the time the golf course was opened to the public in August 2015, Truong An had divested its share, and ownership was spread amongst several different shareholders.

The Him Lam Co. Ltd is now known as Him Lam Corporation.

By November 2007, LOBICO had doubled its chartered capital and as of March 2014, had only three shareholders, including Truong An and two private individual investors.

At that time, Truong An JSC owned 15 percent of the business, while Tran Van Tinh, Him Lam Corp’s general director, possessed a 48.5 percent stake, and Duong Thi Liem, a member of the Him Lam Corp board of directors, had 36.5 percent.

As of November 2014, LOBICO increased its registered capital again to VND950 billion ($41.85 million), with Tinh maintaining his 48.5 percent share. Liem’s stake in the company had reduced to only 10 percent.

At this point in time, the defense ministry-run Truong An JSC was no longer a LOBICO stakeholder. The company instead attracted two new private shareholders, Le Thi Bich Ngoc, the director of business at Him Lam Corp, who held 26.5 percent, and Him Lam Real Estate Business, which owned 15 percent.

This meant that LOBICO effectively became part of the “Him Lam family,” with all four stakeholders having a relationship with Him Lam Corp.

It should also be noted that Tran Van Tinh is the cousin of Him Lam Corp chairman Duong Cong Minh, and Duong Thi Liem is Minh’s younger sister.

And so it was that nine months after coming under the full ownership of the “Him Lam family,” LOBICO inaugurated the Tan Son Nhat Golf Course, answering the question of who owns it.

Now, having come under such scrutiny, experts say the land should have been used to make more space available for the overloaded Tan Son Nhat airport.

Vietnam’s busiest airdrome receives 32.5 million passengers per year, which is well in excess of its design capacity of 25 million.

Amid growing concern that a golf course has effectively hindered the airport’s expansion, Prime Minister Nguyen Xuan Phuc has requested that an urgent feasibility study be conducted on adding a new runway to the international terminal.

Results of the study must be reported to the government within six months, the premier said on Monday.