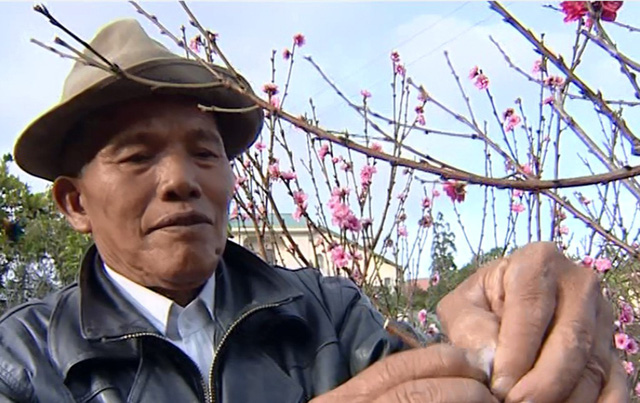 Two men have been credited with cultivating cherry-like apricot and cherry blossoms typical of northern Vietnam in Da Lat City.

Muoi Loi hoa dao (Cherry Blossom) Valley, tucked away at the end of a small alley on Le Hong Phong Street, is a household name among residents and tourists.

The arboretum is known for a variety of cherry blossom breeds that are normally found at the famous Nhat Tan Village in Tay Ho District, Hanoi.

Da Lat, a charming resort town in the Central Highlands province of Lam Dong, has also been dubbed a ‘flower city.’

Its temperate climate, however, is quite inauspicious for the cherry blossoms, which thrive and bloom best in warm weather.

The founder of the unique arboretum is veteran farmer Bui Van Loi, also known as Muoi Loi, who passed away in 2009.

During his lifetime, Loi considered himself a successor to Nguyen Thai Hien, another seasoned farmer who was credited for cultivating mai anh dao (cherry-like apricot blossoms).

Hien (1898-1956) painstakingly turned the wild trees into the ones that line several local streets these days.

The blossoms, scientifically known as Prunus Cesacoides, are an elegant blend between hoa dao (cherry blossoms) and hoa mai (apricot flowers), and resemble cherry blossoms in their shape and pinkish color.

They make stunning sights on the streets and charm locals and vacationers alike when scores of flowering trees indigenous to the area are simultaneously in full bloom around the end of the year and continue to blossom until after Tet.

Hien moved from a central province to Da Lat in the early 1920s. He was a public greenery superintendent tasked with growing ornamental trees on streets around iconic Xuan Huong Lake and in villa courtyards during the former political regime.

He then proposed growing the stunning flowering plants along local streets and solitarily chose the spots for the plants.

During the revamp of Hoa Binh Market in 1935, Hien ordered that the slope meandered from Ong Dao Bridge to the market.

He also decided that the street where Eden Cinema (now Ngoc Lan Cinema) was should be lined only with cherry-like apricot trees.

He gave instructions to prune the branches in order to restrict the trees’ height and boost their width.

Since then, the cherry-like apricot blossoms, which Hien named mai anh dao, have become the city’s signature flower, whose delicate petals that are fluttering in the breeze accentuate the town’s charisma.

During his lifetime, Loi, who founded Muoi Loi Hoa Dao Valley, revered Hien as his own father and highly appreciated Hien’s monumental pioneering work, which laid the foundation for his valley later.

Loi went on with creating his own new varieties of cherry blossoms by dexterously refining Hien’s cherry-like apricot flowers with cherry blossoms from Hanoi’s Nhat Tan Village, which typically bloom in warm climate during the end of the lunar year.

Loi’s unprecedentedly cultivated fruit, which served as a cultural bridge between Hanoi and Da Lat, who lay approximately 1,500km apart, was the result of hard work.

He left his hometown in the central province of Quang Nam for Da Lat in 1958 and followed his vocation of farming flowers and vegetables to the very end of his life.

Determined to germinate the variety in Da Lat, he took a flight with a strong cherry blossom tree from Nhat Tan on board.

Upon landing in Nha Trang, a resort city in the south-central province of Khanh Hoa, he hurriedly took a carriage to Da Lat, approximately 140km away.

Loi did not reach home until dusk.

Since his neighborhood had no access to electricity back then, Loi lit candles and painstakingly grafted pieces from the Nhat Tan tree into his cherry-like apricot trees right in the same evening to ensure the survival and growth of the germs after days of traveling.

The innovative farmer’s hybrid plants were in full bloom at his valley for Tet in 1998, with the flowers being pink and red in color and having thick petals.

Loi also received a trophy as an appreciation for his contribution to sustainable agriculture at an international exposition held in Ho Chi Minh City in 2000.

One year after Loi’s death in 2009, his valley earned a record as the country’s first cherry blossom valley in southern Vietnam.

Bui Van Sang, Loi’s son who is a major in information technology, was set on bringing his father’s achievements to new heights by creating more breeds and properly timing harvests for Tet.

Even though Muoi Loi Hoa Dao Valley fetched a high price due to its location in the downtown area, Sang unwaveringly refused to sell it.

“I really can’t stand seeing the sprouting houses encroaching on and ‘erasing’ the valley that my father had dedicated his entire life to,” he explained.