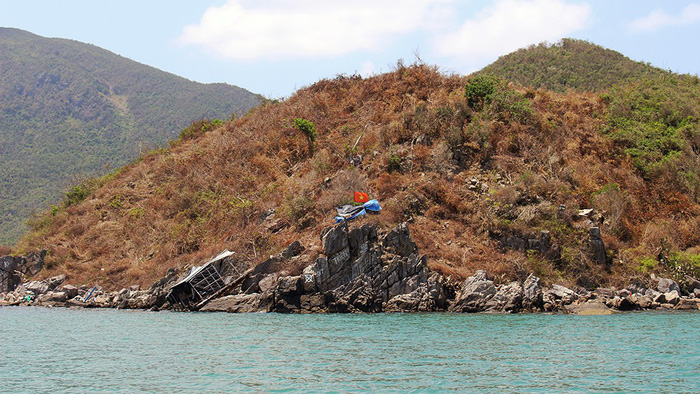 Forests are being cleared against the law at Van Phong Bay, about 60 kilometers north of Nha Trang

Deforestation has been going rife on islands within a bay in the south-central Vietnamese province of Khanh Hoa.

Forests are being cleared against the law at Van Phong Bay in Van Thanh Commune, Van Ninh District, which is about 60 kilometers north of the famous beach city of Nha Trang.

The situation has been discovered after local authorities announced the establishment of the Bac Van Phong special economic zone.

According to the observations of Tuoi Tre (Youth) newspaper reporters, tens of hectares of forests has been wiped out in Vinh Phuong Village, Van Thanh Commune.

Several hectares of trees has also been chopped down on Ngang Islet and Tri Islet, as well as some other islands within the bay. Competent agencies have yet to calculate the exact area of forest to have been destroyed.

Loggers were hired by someone and came in groups of 20 to 30 people, driving motorcycles and carrying along chainsaws, Le Thanh Nguyen, a resident in Vinh Phuong Village.

They arrived in the designated area of forest, set up camps, and left after two to three days once the job was finished, Nguyen elaborated. Following the deforestation, someone would start selling the piece of land, he added.

A two-hectare land plot on Tri Islet was previously sold for VND61 billion (US$2.68 million), the villager said. According to Truong, a land broker in Van Gia Town, the people who hire these loggers never show up.

“After a forest is cleared, the remaining land is divided into multiple plots, which are sold to buyers via brokers,” Truong explained.

Some residents reported that the situation has been going on for nearly a year before becoming highly noticeable over the past week.

Le Hoang Vuong, vice-chairman of the People’s Committee in Van Thanh Commune, considered that the illegal logging on islands in Van Phong Bay is particularly complicated and difficult to handle.

“Local authorities managed to arrest some loggers on Tuesday, who claimed to have been hired to do it,” Vuong stated. “They did not know who their real employers were, however,” he continued.

The loggers were fined VND5-7 million (US$219-307) and required to make a commitment that they would not repeat such violations.

Capturing these illicit loggers is itself a challenge as they often flee to the mountains as soon as officers arrive, the vice-chairman noted.

According to Tran Ngoc Khiem, vice-chairman of Van Ninh District, officials have put together a team tasked with protecting the forest and preventing deforestation in Van Phong Bay.

It is hard to manage the situation as loggers are often sneaky while the number of forest protection officers is limited, Khiem remarked.

“Forest land on these islands belongs to the state ” the officer asserted. “It is against the law to sell it.”