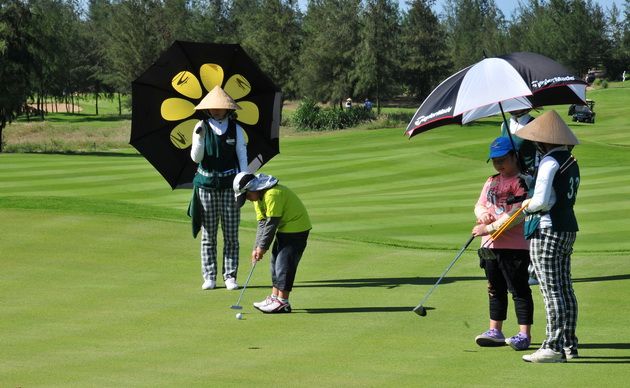 Operating golf course is considered quite a secretive business in Vietnam, as information on how many golf courses there are across the country, whether they post profits or losses, and who plays at them remains little known to the public.

Vietnam is currently home to 32 active golf courses, mostly located in the north, with some 15,000 memberships, both local and foreign, according to the Vietnam Golf Association (VGA).

In 2008, Vietnam was nominated as the “Unexplored Golf Destinations of the year” by the International Association of Golf Tour Operators (IAGTO). Last year, IAGTO also granted Vietnam the “Golf Destination of Asia & Australasia in 2013” title.

The cost of playing golf in Vietnam is up to four times higher than in other regional nations, which reduces its attractiveness and competitiveness, according to VGA.

“Flying from Vietnam to play golf in Thailand is even cheaper than playing in Hanoi,” said VGA general secretary Nguyen Van Hao.

“We receive some 200 players during weekdays, and up to 350 on the weekend,” said Mai Van Nghia, deputy CEO of the Twin Doves golf course in the new urban area in the southern province of Binh Duong.

“Most of them are businesspeople from Ho Chi Minh City and Binh Duong, and foreigners, mostly South Korean, who work in the province,” he revealed.

Elsewhere, the Da Nang Golf Club, located in the central city of Da Nang, and Montgomerie Links, in Quang Nam Province, both of which were considered a relaxing destination for local and foreign businesspeople over the last two years, are not so crowded these days.

“The busiest time is at the weekend, when there are some 100 players, most of whom are Vietnamese,” said H., a female manager at the Da Nang venue, which is one of the top 18-hole courses in the country.

“The number of customers has increased gradually year after year, and most of them are foreigners who are brought to the golf course by the travel agencies,” said a Da Nang Golf Club representative.

“There are also a number of players who are chief officials of businesses headquartered in Da Nang and Quang Nam, and a few local business owners and officials,” she revealed.

Each hole of a golf course will cost the investor an enormous US$1 million, while there are other expenses including land leasing fees and site clearance and compensation, according to Hao from the VGA.

“It’s thus a tough challenge for investors to recoup investment,” he said.

“Only a few out of the 32 facilities countrywide are able to do so,” he said.

Most golf courses are gaining revenue by issuing membership cards, which fetch some $1,000 to $2,000 per year. A member is charged $20 for admission, while infrequent player must pay five times the sum.

Some investors expected to earn profits from the real estate inside the golf courses, but this hope was shattered by the frozen realty market over the last few years, he added.

“The economic malaise has also reduced the number of realty moguls and other sectors who paid high prices for golf course membership,” said Nghia, of the Twin Doves.