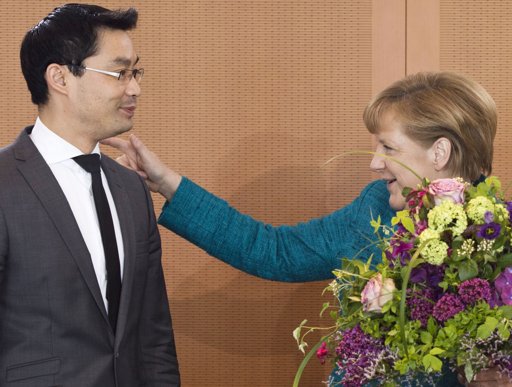 German Chancellor Angela Merkel has revealed she finds "nice eyes" attractive in men, had a Polish grandfather and can easily handle an all-night summit without sleep.

She has spoken about her early years in the former East Germany but insisted she never served as a propaganda secretary in its youth league.

For a notoriously guarded leader, the tidbits about the private life of Europe's most powerful woman have recently turned from a trickle into a steady election-year flow.

It is a tactic that analysts say could either help humanise Merkel or backfire in a close race ahead of the September 22 vote.

Amid the eurozone debt troubles, Merkel has been vilified abroad and portrayed with a Hitler moustache for pushing austerity, and applauded at home for her prudent crisis management.

But beyond the stereotypes, little was known about the 58-year-old, who is variously painted as dour and matronly by her detractors, and sharp and pragmatic by her fans.

This has changed in recent weeks as Merkel has opened the door, albeit just a crack further, on her private life.

The German public has recently learned about her roots in neighbouring Poland and watched her chat wittily at a forum organised by popular women's magazine Brigitte.

At that event, where she quickly won over the room with anecdotes and quiet charm, Germany's first female leader revealed, for example, that she has a "camel-like" ability to store energy for sleepless all-night summits.

Addressing her cautious governing style, often characterised as the politics of small steps not grand visions, she spoke about the importance of "silence, so you can then speak intelligently".

Merkel also explained her habit of forming a diamond shape with her index fingers and thumbs in photo shoots as a way of solving the problem of where to put her hands.

And when pressed on what she finds attractive in men, the trained physicist Dr Merkel, rather than deflecting the question, confessed to a weakness for nice eyes.

"Merkel is usually seen as very matter-of-fact and has always managed to keep her private life entirely out of politics," said political scientist Lothar Probst of Bremen University.

"There used to be a public wow-effect just when she changed her hairstyle. Now we're seeing Merkel undergo a role change and, in small doses, open up and reveal a little more of her human side."

Volker Kronenberg, a political scientist at Bonn University, said he senses that the charm offensive is "highly choreographed ... none of it is authentic".

"You can be sure that in her inner circle, every anecdote is discussed five times before it is realised in a carefully controlled way."

At another event last Sunday, Merkel showcased her favourite movie, the 1973 tragicomic romance "The Legend of Paul and Paula" filmed in East Germany, where she grew up as the daughter of a left-leaning Lutheran pastor.

It is the period before the 1989 fall of the Berlin Wall that has brought up some unscripted and less flattering claims, revived this week in the book "The First Life of Angela M.", one of a raft of new biographies to hit the market.

Merkel has made no secret of her former membership in a communist youth organisation, which was normal at the time, but the authors claim that a young comrade Angela also served as a secretary for agitation and propaganda.

Confronted with the claim at the movie event, Merkel insisted that "I have never hidden anything" but also acknowledged that some facts may have stayed buried "because no-one has ever asked me about them".

She added: "I can only rely on my memory here ... Should something else come up, then one will be able to live with that too."

Biographers have pointed to Merkel's youth in a totalitarian police state, where a careless phrase could wreck lives, as the reason she can hide her thoughts behind a poker face.

Analysts are split on whether the new carefully managed openness will help her win more hearts and minds.

Political scientist Gero Neugebauer said he saw the hand of Merkel's campaign team seeking to soften her "closed" image as she competes against Social Democrat rival Peer Steinbrueck, who is proud of his political "straight talk" but guilty of occasional gaffes.

German voters "don't care about home stories" but choose politicians mostly along party lines and based on their leadership qualities, he said.

"They ask themselves, is she credible, is she assertive, is she trustworthy? They don't care so much about what she eats, what she cooks, how she dresses."