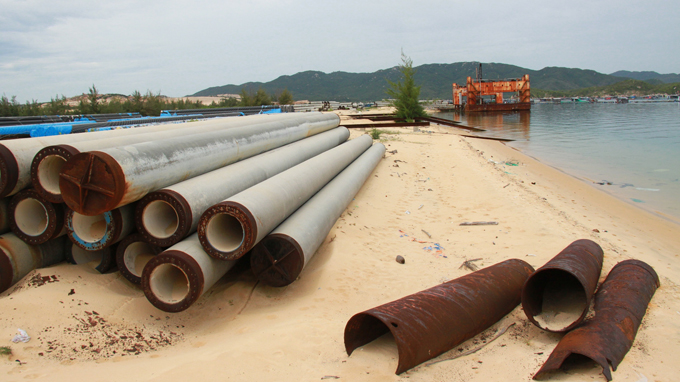 Van Phong EZ a mess after big projects shut down

The Van Phong Economic Zone, based in the coastal province of Khanh Hoa, now looks like an abandoned construction site after two major projects there were canceled due to incapable investors.

The EZ management board announced last week that they have pulled the plug on the Van Phong International Transshipment Container Port, as its investor, state-run shipping line Vinalines, failed to begin work on the project.

The ill-fated project, expected to consume US$3.9 billion worth of capital, broke ground in October 2009 but would never meet its schedule for completion in 2020.

The second project that was canceled is that of the Sao Mai - Ben Dinh Petroleum Investment JSC, a subsidiary of the state-run oil and gas giant PetroVietnam, the investor of the $1.4 billion project to set up the Van Phong industrial service complex in Ninh Hoa District.

The investor failed to start any construction on the project, even though it was expected to be finished in 2017.

Now that two of its largest projects have been suspended, the future development of the EZ has come under question.

The zone is now full of under-construction units left by the halted projects, while the blocks of houses for workers and builders have also become deteriorated.

“I have never seen any workers go there for months,” said Tran Van Hoa, a local who lives near the construction site of the Van Phong port.

Hoang Dinh Phi, deputy head of the management board, admitted that investment in the EZ has lagged far behind expectations.

“We faced challenges in attracting investment, while the investors have difficulty carrying out their projects, which are both the result of the global economic depression,” he said.

The management board will thus implement several incentives to assist investors, Phi said.

“We will simplify several paperwork procedures to speed up the project implementation, while Khanh Hoa authorities will also improve their investment attraction methods,” he elaborated.

The Van Phong Economic Zone was established in 2006, under an order by the Prime Minister.

Spanning 150,000 hectares in Van Ninh District and Ninh Hoa Town, the zone is expected to become a multi-economic zone, with the international container transshipment port playing the key role.

The EZ has so far attracted 126 investment projects, 29 of which are foreign invested, with total registered capital of $12.5 billion.

There are currently 54 active projects in the EZ, 21 of which were already operational prior to the zone’s establishment.

The EZ management board said many investors failed to start work on their projects after groundbreaking.

From 2010 to mid-2013, the board has canceled licenses for as many as ten projects, with a total registered capital of $2.22 billion.