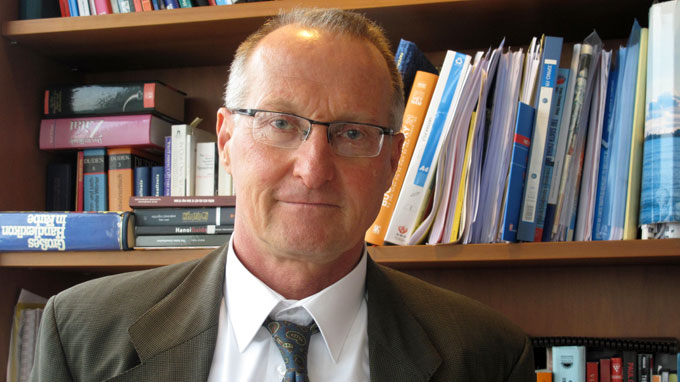 The Swiss Embassy has just announced Switzerland’s new program of cooperation and development with Vietnam between 2013 and 2016, when it will spend more than VND2.8 trillion in grants for projects that are aimed at assisting Vietnamese economic development.

On the occasion of the program launch, September 18, Swiss Ambassador to Vietnam, Mr. Andrej Mortyl, spoke to Tuoi Tre about bilateral relations and issues that he thinks are of crucial importance to Vietnam’s development.

"The coordinated low interest policy of central banks has not worked. It has created an artificial boom in the stock markets and another bubble in the bond purchases, but no significant growth and no jobs," he said.

"The banks and other companies seem to enjoy the artificially low interest rates, or cheap money, but do not use it as an opportunity for urgent restructuring but rather accumulate more debts and create short term profits for the management and their shareholders."

"What’s happening in OECD countries [OECD - Organization for Economic Co-operation and Development] seems to have no relevance to middle income countries like Vietnam but, despite all the differences, Vietnam suffers partly from the same disease as the developed economies, namely the reluctance or lack of capacity of its banking system to serve the small and medium enterprises, or SMEs, with adequate credits."

"This is worrying because we Swiss are convinced that SMEs everywhere are the backbone of any successful economy. If a country’s SMEs wither, the future of the whole economy is very bleak."

"This, among other reasons, is why our program for 2013-16 will be aimed at supporting an environment where Vietnamese SMEs can access credits. We will also help the State Bank with their finance sector reforms. Other areas of cooperation include assisting SMEs to apply international business standards, improve labor standards, increase energy efficiency and waste management efficiency," he added.

Switzerland and Vietnam began diplomatic relations in 1971. Since then, Switzerland has remained an important development partner of Vietnam. Will the new program change that?

Most of our past development activities in Vietnam were to help the fight against poverty. From now on, we wish to assist Vietnam in avoiding the middle income trap with a focus on feeding small and medium enterprises, or SMEs, with credits.

As a middle income country, Vietnam will start to lose its cheap labor advantage as the labor costs increase. Labor-intensive industries therefore will find their ways to other countries like Laos or Cambodia. Meanwhile, the region has countries that are more competitive, such as Malaysia, Thailand or Indonesia, where they have a more skilled labor force. They are the ones who can harvest more added values. This is the trap.

Let’s take coffee as an example. When Vietnam exports their coffee to Switzerland, they benefit from the export of raw or little-processed coffee. But when the same coffee is exported to Thailand, where they do nice packaging and promote trademarks before re-exporting to Switzerland, it’s in Thailand that most added values stay. The same goes with other export products of Vietnam, where most of the export values turn out to be the import costs and foreign investors’ profits. What stays in Vietnam is only a little labor salary.

Switzerland is very good at creating added values and we can share our ‘secrets’ with Vietnam.

How do you think Vietnamese enterprises can create their own added value?

Ambassador Mortyl: Find the niche. Because Swiss companies have fewer advantages in competing with Germany or Japan in producing cars, they take the lead in making air bags for German and Japanese cars. Similarly, you might not be in the best position to build ships in comparison with some certain countries, you may well think of producing equipment and devices for ships to sell to the top ship builders in the world. That is our vision: finding the niche.

In order to do that, we have to go back to the basics. Firstly, the education system has to be improved. This cannot be done in two years. Make your education environment attractive to good teachers of the world. They can be foreign teachers or Vietnamese overseas. I think China is doing better in this field.

Secondly, SMEs should be protected and get access to credits. Vietnam has a few big private enterprises but they can not yet compete internationally.  Despite being private, they are still highly protected, unlike Korean chaebol that were protected only in the beginning and had to stand on their own feet very quickly. Samsung had to compete with Sony. They had to compete to grow.

That is why Switzerland is helping Vietnamese banks to give credits to SMEs and teaching them how to find their added values. Of course, some will fail in that process, but those who succeed will be able to be competitive even after Swiss assistance is over.