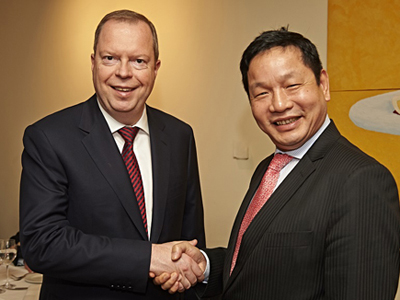 FPT on Thursday finished its first mergers and acquisitions (M&A) deal overseas after buying out RWE IT Slovakia, a subsidiary of the RWE Group - one of Europe’s leading utility companies.

The takeover, also the first M&A of any Vietnamese ICT companies conducted outside Vietnam, also enabled FPT, one of Vietnam leading information and telecommunications technology (ICT) corporation, to rename the firm FPT Slovakia.

The deal, reached by FPT and RWE Group in Berlin, Germany on Thursday, also made FPT Slovakia be teh first FPT Software’s wholly owned company in Europe.

RWE IT Slovakia, being established in 2004, currently has more than 400 employees, most of whom are experts in software applications and programming (SAP) area. Previously, as an internal IT Service provider, RWE IT Slovakia delivers high quality services to RWE Group, mainly in the area of SAP and ‘Smart Home’ solutions.

As part of the agreement, FPT also won a 5-year contract with RWE Group which enabled FPT Software Vietnam and FPT Slovakia  to jointly delivered IT services worth tens of millions of dollar to RWE Group.

“This is the landmark deal for FPT. Closing a strategic deal with RWE Group is changing FPT position in Europe,” said FPT’s Chairman Truong Gia Binh.

“The deal will position FPT as a leading service provider in Europe, paving the way to expand their customer base, strengthen delivery capabilities at Europe and adding about 400 experienced consultants in SAP area,” according to FPT press release after the deal.

The corporation will focus on providing full IT services and migration services based on new technology, including cloud computing, mobility, and big data, to developed markets such as Northern America, Europe, Japan, and Singapore.

Foreign market contributed over $1.1 trillion ($52 million) revenue to FPT’s business result in first 5 months of this year, up 19 percent compared to the same period in 2013.

The local ICT corporation has planned to gain $340 million in revenue from global markets by 2016 through self-development projects and M&A.

RWE Group supplies electricity and gas to more than 30 million electricity customers and 10 million gas customers, all over Europe.

With revenue of more than US$70 billion and more than 66,000 employees in 2013, RWE Group, a ‘heavy weight’ in the European economy, is expected to spend a total of $1 billion on IT projects.