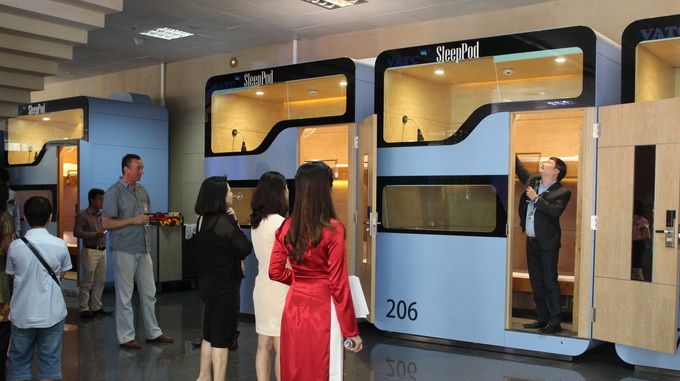 Vietnam’s first-ever airport sleep pods—places for passengers of delayed or canceled flights to rest—were suspended from operation on Saturday by the country’s aviation watchdog after only four days of service at Hanoi-based Noi Bai terminal.

Fourteen sleep pods, consisting of three single rooms and 11 double rooms, were unveiled on July 22 at the departure terminal of the Noi Bai International Airport by the Vietnam Aviation Tourism Corp (VATC).

The well-equipped sleep pods were intended to serve passengers awaiting their flights with free water and snacks for prices ranging from VND210,000 (US$9.88) to VND252,000 ($11.86) for the first three hours.

While sleep pods are common at many international airports, it was the first time the modern facilities had been put to use at a Vietnamese terminal.

However, the Civil Aviation Authority of Vietnam (CAAV) had ordered a suspension on the new service, deputy chief of the authority Vo Huy Cuong confirmed to Tuoi Tre (Youth) newspaper on Saturday.

The decision came one day after the CAAV inspected the sleep pods, Cuong said.

The official admitted that while the sleep pods did not occupy a large area at the terminal, the service had to be “temporarily ceased pending a new, more suitable plan to make the best use of them.

“The suspension is necessary at a time when flight delays and cancelations are attracting particular attention from the public. The infrastructure at Noi Bai airport is not perfected,” he added.

The airport authority of Noi Bai and the VATC both agreed to suspend the service to wait for a new business plan and a more suitable location, Cuong said.