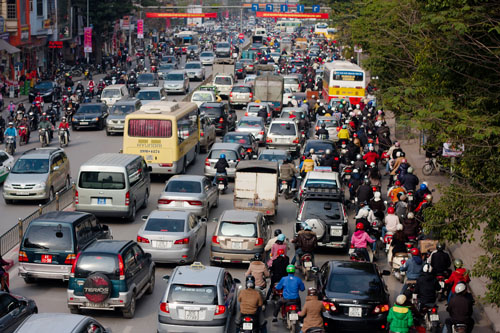 During the urbanization process in the past 10-20 years, the number of cities of Vietnam has risen to 770 from nearly 600 cities in 1998, but the urbanization rate of Vietnam, about 34 percent annually, is slow compared to other countries in the region.

However, according to the national urban development plan of Vietnam, from now to 2025, the number of cities across the country will reach about 1,000, with an average increase of about 20 urban areas per year, she added.

Currently, about 33 percent of Vietnam's population lives in urban areas. This percentage is expected to rise 50 percent by 2025, said UBIFRANCE.

These figures show that Vietnam's cities are facing many challenges including strong population growth and sustainability for future generations.

However, according to experts, the development of urban areas, especially in big cities, pose enormous challenges, leading to a population explosion, deficient infrastructure, energy shortages, increased waste pollution which are all worsened by climate change.

New concepts to be adopted

Nguyen Quoc Thong, deputy chairman of the Vietnam Architects Association, told the national Vietnam Television that the French concepts in urban planning are different from those of Vietnam.

Their sustainable approach is in their philosophy in bringing nature as close as possible to urban areas by appreciating the landscape, water, trees and even urban agriculture. Natural elements are considered hard elements and the basic elements to create sustainability, he said.

"This concept is not new in the world but is new to Vietnam today. I think this is a good approach to sustainability," he added.