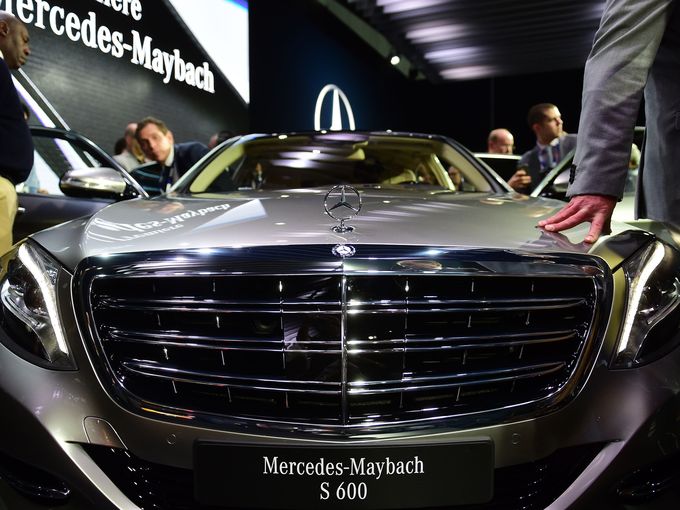 Vietnamese people have shown that they favor imported cars over locally assembled vehicles, as the debate about whether the local automobile industry can withstand a possible collapse after 2018 has not ended.

Last month Mercedes-Maybach, the re-launched luxury brand from Daimler AG, reported that Vietnamese customers have ordered ten units of its luxury Mercedes-Maybach S600 model, which cost VND9.6 billion (US$451,850) each.

Fifty Mercedes-Maybach S600 cars will be produced for the global market in 2015, the German carmaker said.

Official figures have also indicated that sales of imported cars in the first four months of this year were much better than expected, with 34,000 units worth some $883 million sold, an increase of 125.4 percent and 188.8 percent in volume and value compared to the same period last year.

According to a recent report by the General Statistics Office (GSO), about 9,000 automobiles, or completely built units (CBUs), were imported into the country last month with a turnover of $294 million.

Compared with the previous month, the importation of CBUs fell by 11 percent in volume, but rose 7.4 percent in value.

According to a recently released report of the Vietnam Automobile Manufacturers' Association (VAMA), total sales of personal cars in Vietnam reached 9,423 units in April, up 0.1 percent month on month.

The number of CBUs imported by VAMA members topped 4,200 vehicles, up 19 percent from the previous month.

While sales of locally assembled vehicles during the first four months rose by 58 percent, the sales of imported cars surged 73 percent compared to the same period last year, according to the VAMA.

The Southeast Asian country last year spent $1.57 billion importing 72,000 vehicles, rising 103.8 percent and 117.3 percent in volume and value compared to 2013, respectively, the highest rates ever, the GSO said in its report in January.

As sales of domestically assembled automobiles, or CKDs, grew more slowly than the sales of CBUs, this reflects the trend that Vietnamese people continued to turn away from the former.

In late April, local experts raised concerns about the survival of the automobile industry following Japanese carmaker Toyota’s threat to gradually pull out of Vietnam if the government fails to provide it with financial and taxation support in the next three years.

By 2018, as soon as the import taxes slapped on many kinds of personal cars imported from ASEAN countries sharply drop or are exempted altogether as promised by Vietnam when joining the ASEAN Economic Community, the prices of car imports will become cheaper than their locally assembled counterparts.

Toyota said the price of CKDs, as calculated by the Japanese automobile manufacturer, may be 15-20 percent more expensive than CBUs by then.

More potential to be tapped

Many luxury car brands, including Lamborghini, Jaguar, Bentley and Rolls-Royce, have established branches in Vietnam in recent years to offer the rich a chance to own officially distributed cars and have their vehicles maintained properly via licensed service providers, which perilously costs them much more.

Vietnam is projected to stand third in the group of countries with the fastest growth rate of affluent population globally, or New Wealth Builders (NWBs), which are households with financial assets of $100,000 to $2 million, in the 2014-2020 period, according to a report released by the Economist Intelligence Unit under The Economist magazine on March 23.

During the period, the Southeast Asian country will have about 347,000 NWBs, representing a 34.9 percent compound annual growth rate, standing behind only India (47.4 percent) and Indonesia (41.2 percent), said the report.

Meanwhile, according to the latest Wealth Report 2015 unveiled by British property consultant firm Knight Frank in March, Vietnam is expected to have around 300 super-rich people, or ultra-high net-worth individuals (UHNWIs), by 2024.

The Southeast Asian country will also see the fastest growth rate in the number of UHNWIs at 159 percent in the 2014-2024 period, followed by Indonesia (132 percent) and the Ivory Coast (119 percent), the report said.

As defined by Knight Frank in the report, UHNWIs are those with assets of $30 million or more.

The Establishment Post news website quoted a report from Euromonitor International as stating that more than 100,000 Vietnamese in 2013 had a disposable income of more than $75,000 per annum.

A survey conducted by Nielsen concluded that Vietnam ranks third in the world in terms of fondness for branded goods, only surpassed by China and India.

Moreover, 56 percent of the participants responded that they are willing to pay more for designer products than for less known brands with the same functionality,the Establishment Post reported.