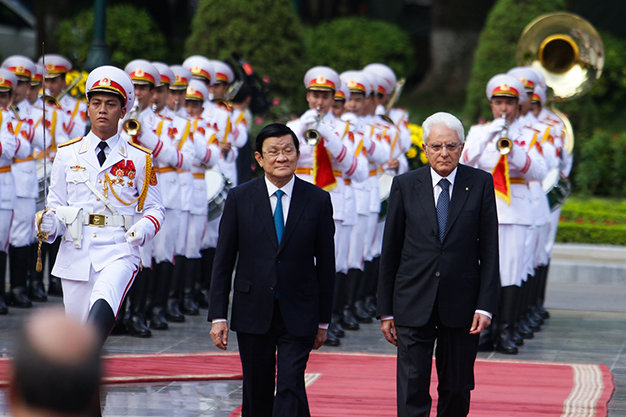 Italy has considered Vietnam one of the ten emerging markets to prioritize developing trade and investment with, Italian President Sergio Mattarella told his Vietnamese counterpart Truong Tan Sang in Hanoi on Friday.

Many Italian businesses have plans for long-term investment in the Vietnamese market and have launched several successful projects in the country, the visiting president said.

He also suggested that Italian enterprises in Vietnam be given more favorable conditions.

The Italian leader also agreed to encourage the Italian Parliament, following the proposal of President Truong Tan Sang, to approve the European Union (EU) – Vietnam Framework Agreement on Comprehensive Partnership and Cooperation (PCA) signed in 2012, according to Vietnam’s Ministry of Foreign Affairs.

The PCA framework is still waiting for the approval of four EU member states, the ministry explained.

The two countries shall establish new development orientation suitable for current demand based on the achievements of ongoing projects, President Mattarella added.

New ties between Vietnamese and Italian universities will also be formed and cooperation in education, science-technology, vocational training will be enhanced to support the Vietnamese living in Italian territory, he said.

Regarding the disputes in the East Vietnam Sea, Italy supports Vietnam’s decision to manage disagreements by peaceful measures to maintain the freedom of navigation and aviation, and preserver stability and security in the region, president Mattarella stated.

The two presidents also exchanged their points of view in the increasing formation of artificial reefs which has affected the security and safety of navigation and aviation in the East Vietnam Sea, where the major international trade route connecting Europe and East Asia is situated.

President Truong Tan Sang also proposed that Italy express with the Group of Seven (G7) and the EU its support for the management of disputes in accordance with the United Nations Convention on the Law of the Sea issued in 1982.

Italian President Sergio Mattarella is seen at the Temple of Literature in Hanoi. Photo: Tuoi Tre