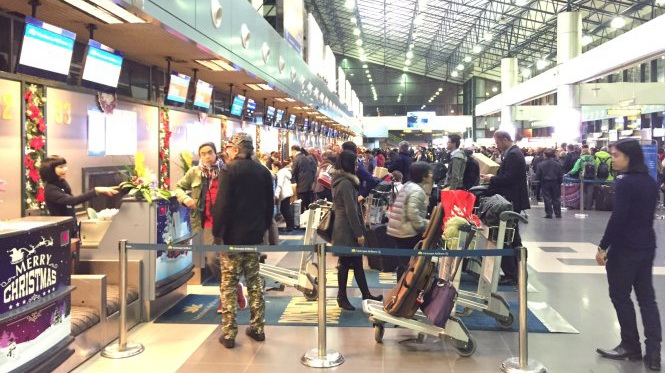 Over 38,000 flights delayed and canceled so far this year: Vietnam aviation authority

Over 38,000 flights operated by Vietnam-based carriers were delayed or canceled in the first 11 months of 2016, according to a recent report by the Civil Aviation Authority of Vietnam (CAAV).

The report was published on Monday at a conference hosted by CAAV in Hanoi to review the year’s national aviation service.

According to the report, airlines in Vietnam operated over 228,000 flights in the first 11 months of 2016, an increase of around 37,000 flights compared to last year.

Over 16 percent of those, or 36,844 flights, were delayed, while 1,605 others were canceled, the report says. Both numbers illustrate a slight rise compared to the same period in 2015.

The report also predicts Vietnam’s aviation market to serve up to 52.2 million passengers by the end of 2016, a 29 percent surge over last year. Among those, 28 million will be domestic passengers, 30 percent more than the number of domestic flyers in 2015.

The growth has been attributed to the expansion of local budget airlines VietJet Air and Jetstar Pacific, which are now operating 50 routes connecting Hanoi, Da Nang, and Ho Chi Minh City with another 17 local airports.

Close to 55 percent of domestic passengers opted for no-frills airlines, according to the report.

An increase in the fleet size of Vietnam-based airlines was also observed in 2016, with 14 new jets added so far this year and five more expected by the end of the year.