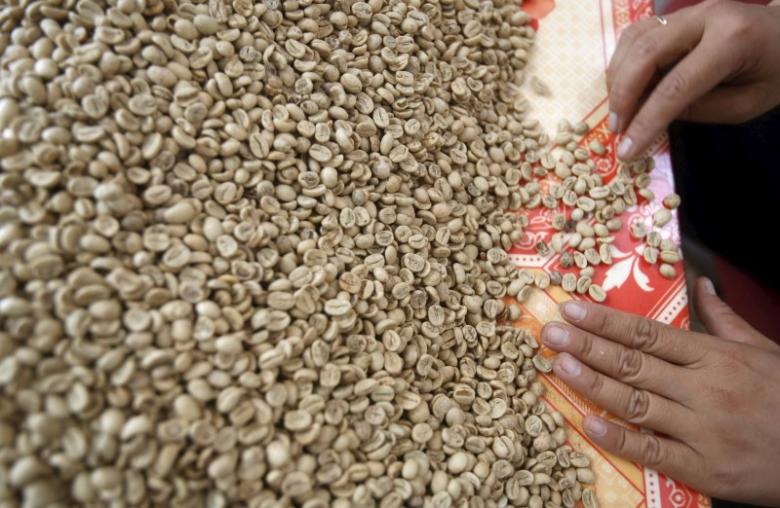 Vietnamese coffee exporters, faced with dwindling robusta supplies in the world's top producer, are paying up to buy beans from international trade houses who scooped up much of the crop early in the season.

Local exporters in Vietnam are struggling to find coffee to fulfil their contracts, trade sources said, after farmers sold forward much of the harvest early on in the season when global prices hit their highest in more than five years.

The squeeze comes at a time of tight supplies in the country, after a smaller crop this season and heavy rains during harvesting that wreaked havoc on crop quality.

Vietnam is the world's top grower of robusta coffee, which is mainly used to produce instant or soluble coffee.

The coffee is priced against ICE robusta futures and international trade houses were able buy at a discount of $50 to $70 a tonne when farmers were selling heavily.

"The international trade has been stockpiling basically," said one European trader. "They decided to get long early on."

Local exporters, now unable to get supplies from farmers, have been forced to buy from the international trade houses at premiums of $20 to $30 a tonne, industry sources in Europe and Vietnam estimate.

They pegged profits for the international trade houses, who have stored the coffee in their warehouses in Vietnamese ports, at $70 to $100 a tonne.

"They used financial leverage to buy at discounts at the beginning of the harvest season," said Phan Hung Anh, deputy director of Anh Minh Co, a coffee-trading firm in Daklak, Vietnam's largest coffee-growing province. "And now they sell back to companies at premiums."

"Vietnamese firms can't do the same because their financial capability and storage don't match those of international trading houses."

Vietnam is expected to produce 26.3 million bags of coffee in the 2016/17 season, down from 28.4 million in the prior season, Rabobank figures show.

International traders were holding roughly 6.5 million 60-kg bags (390,000 tonnes) at the end of May, out of about 9 million in stocks in the country, sources estimated. They have sold about 30,000 to 40,000 tonnes to local exporters, Vietnamese traders said.

These trades have been painful for local Vietnamese exporters, some of whom sell beans to coffee giants such as Nestle and Jacobs Douwe Egberts.

Traders said many had sold coffee far in advance to roasters at much lower prices and are now feeling the pinch of strengthening differentials as they inch towards delivery.

The exporters have been left with little choice, however, as farmers sit on their remaining good quality coffee in the hope that prices will climb.

Farmers are holding less than 15 percent of the crop at this point in the season, compared to about 35 percent in a typical year, traders estimated.

Local exporters could find themselves squeezed further in coming months as supplies continue to dwindle and differentials strengthen before the start of the next harvest in October.

There is also a risk international trade houses may stop selling coffee to Vietnamese exporters, as they shift attention to delivering on their own contracts with roasters later in the year.

"That tightness is starting to materialise," said another trader. "And if they turn off the tap, the prices and the differentials will go even higher."