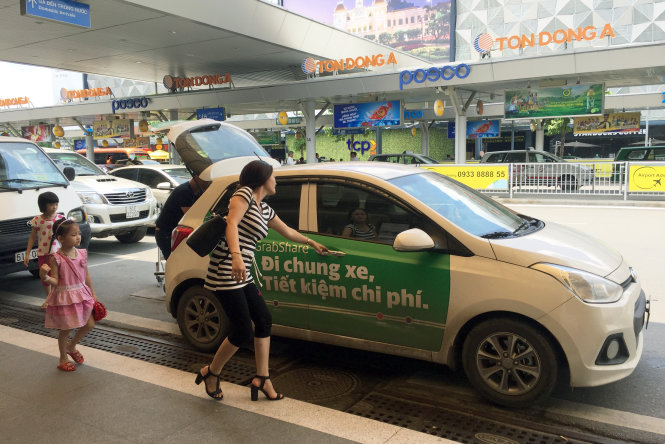 The pilot program allowing Grab and Uber as well as several local taxi and transportation companies to operate their app-based services in three Vietnamese localities has expanded so rapidly that the transport ministry has been forced to put the brakes on it.

As of April 2017, more than 13,500 cars were participating in the ride-hailing industry, operated by seven companies of the pilot program in Hanoi, Ho Chi Minh City and the south-central province of Khanh Hoa.

The seven services selected by the transport ministry for the program were foreign players Uber and Grab, and Vietnamese names including Mailinh Car, Thanhcong Car, Home Car, LB.Car, and Vic.Car.

Given the large number of cars operating under the new business model, where drivers connect with passengers via mobile apps, the transport ministry has requested that no more new vehicles be licensed to add to the existing fleets of those seven companies.

The decision came after the Hanoi and Ho Chi Minh City transport departments proposed a rule preventing an expansion of the number of cars able to join the pilot program, saying the tech-based cars had been putting pressure on local traffic infrastructure and creating unhealthy competition with traditional taxi and transportation firms.

Ride-hailing apps like Uber and Grab have easily won over local commuters, offering reasonable fares and allaying passengers’ fears of being overcharged or cheated.

The decision by the transport ministry has been hailed by the Hanoi and Ho Chi Minh City transport departments and conventional taxi companies, with the number of tech-based cars in each city reaching alarming highs.

In Hanoi, there are now 19,200 taxis operated by 77 different companies.

This number will remain unchanged until at least 2020 under the capital city’s taxi management plan, meaning no taxi firms will be allowed to expand their fleets.

However, the number of app-based cars has topped 7,000.

In Ho Chi Minh City, it took only a couple of years for the app-based taxi fleet to reach 22,000, double the number of traditional cabs in operation.

The municipal transport department has said previously that the number of ride-hailing cars in the city is “beyond the authorities’ imagination.”

A war has erupted between the app-based cars and their traditional counterparts, particularly in Hanoi and Ho Chi Minh City.

The motorbike segment of Uber and Grab, Uber Moto and GrabBike, are also in conflict with the traditional xe om (motorbike taxi) drivers.

In the latest incident, police in Ho Chi Minh City have had to fire their guns into the air to end a brawl having broken out between two groups of GrabBike and xe om drivers.