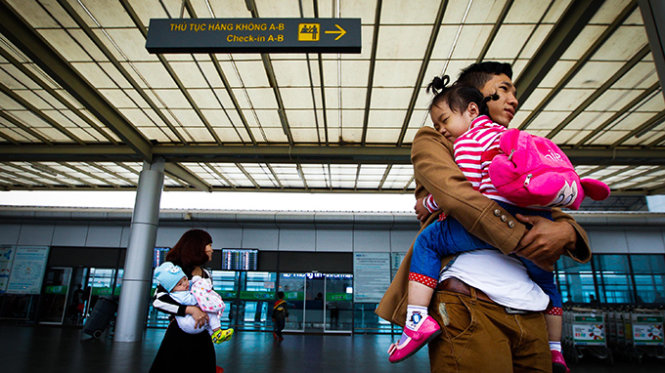 Vietnam Airlines has advised its passengers to arrive at the airport earlier than usual as summer, the peak time for air travel, has begun.

Flyers are recommended to be present at the airport two hours ahead of their departure time for domestic services, and three hours for international flights, the flag carrier said on its website on Tuesday. This is one hour earlier than normal practices.

It is also advisable for passengers to be at the boarding gates at least 30 minutes before boarding, according to the announcement.

Check-in counters for Vietnam Airlines flights will close 40 minutes prior to departure time for domestic services, and 50 minutes for outbound routes. The boarding gates will close 15 minutes before departure.

The carrier said it was not overcautious, given the fact that more than 6,000 Vietnam Airlines passengers showed up late at the boarding gates at Noi Bai International Airport in Hanoi in the first ten days of this month alone.

“The phenomenon is expected to worsen in the coming time as work for an upgrade project began at Noi Bai on July 11,” the airline said.

The eight-month upgrade process at Noi Bai will not end until March 2018, aimed at increasing the capacity of its Terminal T1 to 15 million passengers per year from the current nine million. Construction will be carried out across the terminal, likely to adversely affect flight activity.

Vietnam Airlines also advised that passengers complete check-in online or use the machines installed at the airport to save time.

People flying to and from Tan Son Nhat International Airport should also take these recommendations seriously as one of the two runways at the Ho Chi Minh City airdrome is set for temporary shutdown during an expansion project.

The overloaded airport, serving more than 32 million passengers against its design capacity of 25 million, will become even busier when all flights will have to take off and land on one operational runway during the upgrade process.