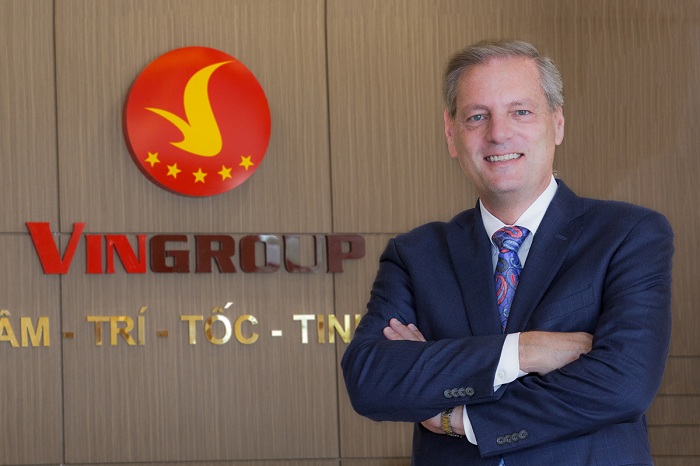 Vingroup has appointed an ex-leader of General Motors as the general manager of its Vinfast automobile plant, in an apparent bid to leverage his experience in realizing their ambition of manufacturing made-in-Vietnam cars.

James B. DeLuca, whose last position with the U.S. automaker was executive vice president - global manufacturing, manufacturing engineering, and labor relations between February 2014 to July 2016, got the new job on Monday.

DeLuca has 37 years of experience in providing leadership and strategic direction across manufacturing, manufacturing engineering and labor relations in the automotive industry.

At General Motors, DeLuca led a team of 200,000 employees, 172 manufacturing plants and 40 union partners in four regions around the world.

“With such experience, DeLuca will contribute to the building of safe, quality and world-class models for Vinfast,” Vingroup announced on its website on Wednesday.

Vietnam’s leading property developer Vingroup began construction of its car factory, a project worth US$1-1.5 billion in the first phase, in the northern city of Hai Phong earlier this month.

The company expects to produce 100,000-200,000 Vinfast-branded vehicles per year in the first phase, including five-seat sedans, seven-seat SUVs and electric motorbikes.

The newly appointed general manager will be in charge of construction, operations and development for the sedan segment only, according to Vingroup.

On his first working day, DeLuca said he was honored to join Vingroup and with individuals that are enthusiastic and ambitious to create a new chapter for Vietnam’s automotive industry, which is producing the country’s first locally-branded cars.

The general manager said he will use his expertise, experience and knowledge, gained from both the U.S. and global markets, to help develop Vinfast.

DeLuca added that he and his Vinfast partners will exert the effort required to meet their goal of producing the first batch of Vinfast cars by September 2019.