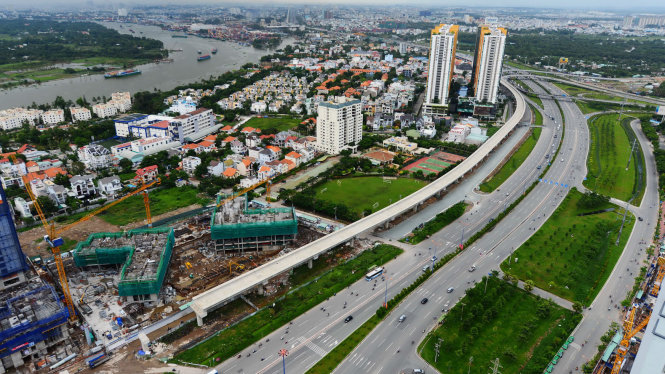 The Japan International Cooperation Agency has expressed its concerns about the way Vietnam is managing Japanese ODA loans for some of its major infrastructure projects.

At an annual press conference in Hanoi on Wednesday, JICA said it already allocated a budget for 2017 ODA loans to Vietnam in January, despite the multitude of unsolved issues in the way the country allocates its capital.

The problems include late or ceased disbursement of ODA capital for many infrastructure projects under development by the Vietnamese transport ministry, most notably the metro line No.1 in Ho Chi Minh City, according to JICA.

As of the end of September, Vietnam’s unpaid debt to Japanese contractors totaled 4 billion yen, or US$35.42 million, according to JICA.

If the Vietnamese government continues to stall on capital allocation for these projects, the debt could skyrocket to 20 billion yen, or $177.1 million, by the end of 2017, the Japanese agency warned.

While it is not easy to borrow ODA, the Vietnamese government has been slow in its disbursement of credit to local projects out of its fear of breaching the public debt ceiling.

Asked by Tuoi Tre (Youth) newspaper if the situation will affect the Japanese government’s future lending plan, Fujita Yasuo, JICA chief representative in Vietnam, said an official decision has yet to be made.

Fujita also noted that the Japanese government has refrained from commenting on the possibility of a reduction or cessation of ODA loan grants to Vietnam.

He did note, however, that there are two major concerns about the way Vietnam treats its ODA loans.

The first, according to Fujita, is that if the Vietnamese government fails to ensure the payment schedule for ODA-funded projects, the Japanese government may hesitate to provide new lending in the future.

More importantly, he added, is the fact that ODA loans are funded through taxes collected from Japanese citizens and businesses.  These taxpayers can easily withdraw their support for Japan’s policy of offering ODA to Vietnam if the Southeast Asian country’s government continues to delay payments for Japanese contractors.

The JICA meeting came after Le Nguyen Minh Quang, head of the management board of the Ho Chi Minh City metro project warned that late disbursement of capital will result in “unimaginable consequences.”

“The JICA has complained about Vietnam repeatedly lamenting on disbursement protocols while the Japanese side has completed all the necessary capital arrangement,” Quang said in an interview with Tuoi Tre.