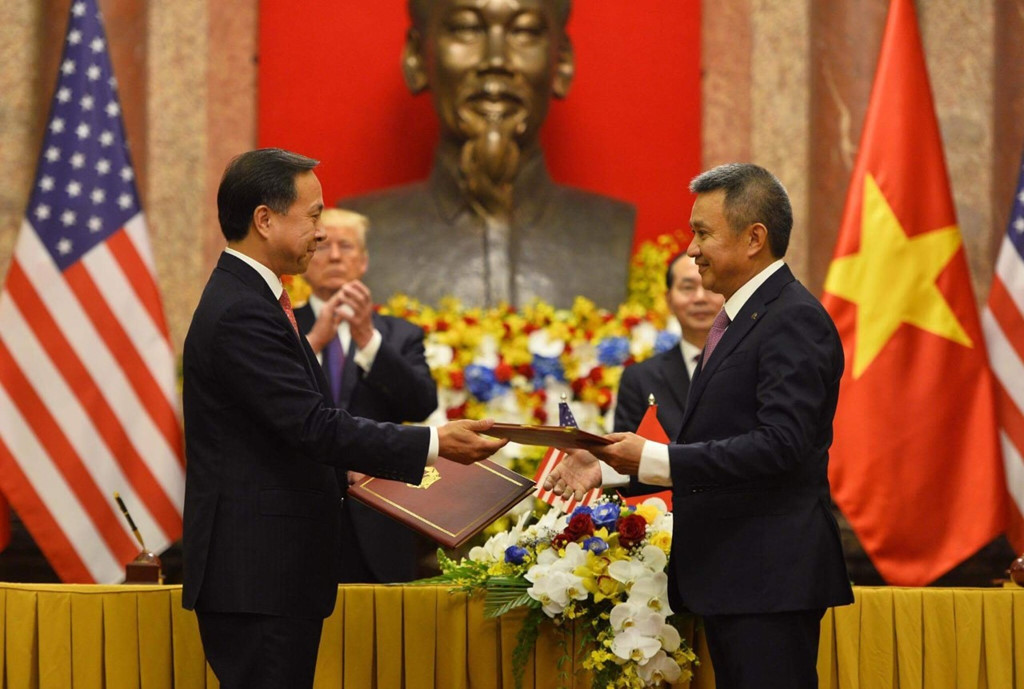 ​Vietnam, US sign deals worth $12bn during Trump visit

A number of trade deals totaling more than US$12 billion were signed between U.S. and Vietnamese companies during President Donald Trump's state visit to the Southeast Asian country.

In a joint statement issued on Sunday by President Trump and his Vietnamese counterpart Tran Dai Quang, the leaders welcomed the new commercial agreements as they pledged to deepen and expand the bilateral trade and investment relationship through “formal mechanisms,” including the Trade and Investment Framework Agreement (TIFA).

Among other initiatives, both leaders welcomed the granting of access to the Vietnamese market to U.S. distillers and new market access for Vietnamese star apples in the U.S.

President Trump, who was in Hanoi on November 11 and 12 for an official state visit, at the invitation of President Quang, wrote on Twitter that he had had a “wonderful visit to Vietnam” and expressed his gratitude toward his Vietnamese counterpart.

Before arriving in Hanoi, the U.S. leader had been in Da Nang to attend the annual APEC summit, a regional economic forum comprised of 21 Pacific Rim member economies that work to promote free trade in the region.

Among the deals signed on Trump’s visit was a $1.5 billion agreement between Vietnam Airlines and Pratt & Whitney, according to which the state-owned flag carrier would use the American aerospace manufacturer’s PurePower Geared Turbofan (GTF) engine for its order of 20 new Airbus A321neo aircraft.

The Vietnamese airline promises to buy 44 GTF engines from Pratt & Whitney to be used on the new jets, while the American company will provide maintenance on its engines.

Vietnam Airlines’ order is scheduled for arrival by no later than 2019.

Low-cost carrier Vietjet closed a similar agreement with Pratt & Whitney, according to which the airline will use the American company’s GTF engines for its order of ten new aircraft in a deal worth $600 million.

The two companies have so far impacted trade turnover by $3.7 billion.

Since entering into service in early 2016, the GTF engine has demonstrated its promised ability to reduce fuel burn by 16 percent, regulate emissions by 50 percent and reduce plane’s noise footprint by 75 percent, according to a press release by Vietjet.

President Trump is the fourth consecutive U.S. President to conduct a state visit to Vietnam following the normalization of diplomatic relations in 1995.

His predecessors were Bill Clinton, George W. Bush and Barack Obama, who visited Vietnam in 2002, 2006 and 2016, respectively.

Vietnam is Trump’s fourth destination in his 12-day Asia visit, including stops in Japan, South Korea, China, Vietnam and the Philippines.

It is estimated to be the longest Asia trip ever made by a sitting U.S. President.