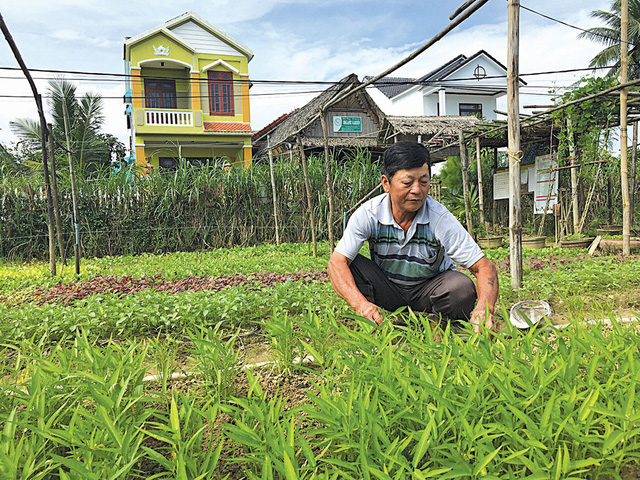 A farmer in Vietnam has been going places with his organic farming after ditching a harmful, old model of vegetable cultivation with pesticides.

Meo began growing veggies in 2013 just to earn some extra income, as his main job was previously in the paddy fields.

The farmer originally used pesticides in growing his vegetables. He then regretted letting his wife sell the produce at the market.

“We didn’t have the courage to eat the veggies that we grew,” Meo admitted.

Following an awareness campaign by the local administration, Meo and his wife decided to switch to farming organic vegetables using new methods, although the previous model was truly profitable.

Meo was the city’s pioneer in the field, willing to open his wallet on learning new cultivation techniques and reforming his farm.

“I stayed committed to growing clean vegetables, hoping that my products would be sold in restaurants and supermarkets,” he said.

After a few months, Meo’s vegetable farm was ready for harvest.

Local residents started to join hands with the farmer, expanding his veggie field to an area of over 6,000 square meters.

The organic farm, named Thanh Dong, began to produce good yields, thanks to the cooperation of local farmers and the assistance of agricultural engineers.

Though the process can be complicated, the produce is guaranteed to be clean and safe.

The soil is tested by competent agencies, fertilizer comes from natural sources, and water for the plants is thoroughly treated.

All little details have to meet the standards to ensure that the vegetables can be eaten right on the farm.

The facility is also open to tourists and students, for a fee, while Meo is in charge of delivering presentations to visitors.

Surrounding the veggie farm are eateries, hotels, and resorts.

“I am invited to other provinces to talk about the farming of organic veggies from time to time,” Meo stated.

From farm to the world

The products are now sold to restaurants, hotels, conventions, and are always sold out despite a rather high price.

According to Nguyen The Hung, vice-chairman of the Hoi An People’s Committee, Meo is a “special farmer” as he has pioneered in the field of organic farming without any formal training.

In November, Meo was among the three Vietnamese who were invited to India to attend an international conference on organic farming, which was organized by the International Federation of Organic Agriculture Movements (IFOAM).

Feeling anxious, the man, being the only Vietnamese farmer, still managed to deliver a speech on his journey in organic farming in front of delegates from 50 countries.