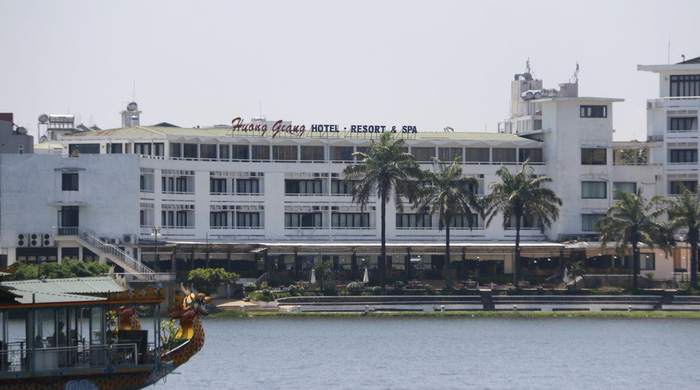 The administration of Thua Thien-Hue has been discovered selling major shares of a state-owned company to a private corporation at prices significantly lower than market value and without a bidding process, leading to the 'loss' of several hotels located on 'prime' land plots in the central province.

Several four- and five-star hotels and tourist facilities in Hue City, Thua Thien-Hue, that were previously owned by Huong Giang JSC have been sold to Bitexco Group as part of a divestment plan put in place by the provincial People’s Committee.

The administration had held 62.8 percent of Huong Giang’s shares since July 2007.

Prior to its privatization in 2007, Huong Giang was the province’s most prominent state-owned company in the tourist sector, managing some of the most luxurious hotels and resorts in the city, namely Huong Giang, Saigon Morin, La Residence and Lang Co Beach Resort.

Huong Giang Hotel is located on a 1.4 hectare land plot, stretching 200 meters along Le Loi Street adjacent to the Huong (Perfume) River. The venue is always listed in the top ten hotels selected by the Vietnam Tourism Association.

Saigon Morin is a four-star hotel situated near the famous Truong Tien Bridge.

Meanwhile, La Residence, a 1.7 hectare property was the first five-star hotel in Hue.

Two subsidiaries of Huong Giang JSC also own a tourist service center on Le Loi Street, a restaurant on nearby Hun Vuong Street, and a hot spring in My An Town.

In March 2016, the Thua Thien-Hue administration decided to sell all of its 62.8 percent stake at Huong Giang to Bitexco Group for VND158 billion ($6.95 million), as part of their divestment plan.

Combined with their previously owned 7.6 percent of shares in the firm, Bitexco wound up controlling 70.4 percent of the company after the transaction, making it the largest shareholder in Huong Giang at the time.

According to Le Cao, a lawyer from the central city of Da Nang, the Thua Thien-Hue People’s Committee should have carried out a bidding process to choose the most suitable buyer of its shares, as per the law.

Financial statistics show that Huong Giang JSC was profitable from 2008 to 2014.

In early 2017, a major shareholder of La Residence, one of the hotels owned by Huong Giang, sold 51 percent of its shares to a Japanese business for $7.2 million.

Meanwhile, 62.8 percent of Huong Giang JSC shares were transferred to Bitexco for only $6.95 million.

Nguyen Van Cao, chairman of the Thua Thien-Hue People’s Committee, affirmed to Tuoi Tre (Youth) newspaper that they had carried out the transaction in accordance with regulations.

“We wanted to pick a strategic investor capable of creating an international tourist brand for Hue, and Bitexco met all of our requirements,” Cao explained.

“We had asked the central government for permission to choose the investor without conducting a bidding process,” the official continued.

“The request was approved by the government.”