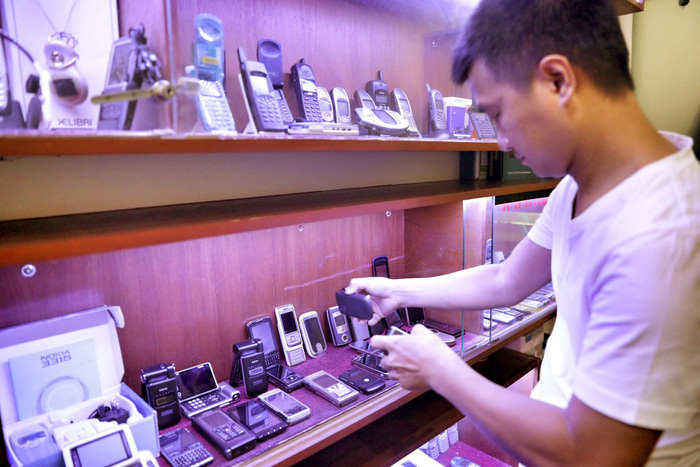 Many consumers in Ho Chi Minh City are willing to pay a high price for used mobile phones of older models despite the continuous release of new designs and technology by famous smartphone brands.

Some people are not hesitant to open their wallet for cellphones that are up to 10 to 15 years old, as they consider them ‘vintage products.’

Tuoi Tre (Youth) newspaper reporters paid a visit to a shop on Pham Ngu Lao Street in District 1, Ho Chi Minh City, where a variety of older models of Nokia, Motorola, and Sony phones are offered at VND2 million (US$88) to VND10 million ($440) apiece.

These phones were first released around 2005.

Other types of flip phones produced by Nokia and Motorola are also preferred by many buyers.

Nguyen Dinh Huy, a resident in District 8, who had just bought a Nokia 8800 model at VND4.7 million ($207), said he could be able to purchase a brand new mid-range smartphone at a similar price.

However, Huy still preferred the used Nokia device for its classic design.

According to the owner of the shop, he can sell up to 300 old phones on a daily basis.

At another store on Le Van Sy Street in Tan Binh District, some gold-edition Nokia mobile phones are sold at a whopping VND10 million ($440) to VND30 million ($1,320).

Although many brands have decided to relaunch their older models, the majority of buyers are looking for the used products that were manufactured many years ago, said Nguyen Trung Duong, the store owner.

Most buyers of these ‘vintage’ handsets are middle-aged people as the devices give them a sense of nostalgia, sellers stated, adding that others pick the old models because of their old habits.

Some also believe that the old phones would provide higher security and lower risks of information leakage.

According to experts, buyers should pick reputable shops and sellers when it comes to purchasing phones of older models.

Dishonest merchants may take out some parts of the original handset, which is difficult to notice, thus the entire value and quality of the phone would be reduced.

A warranty is also necessary as used phones are more likely to malfunction.