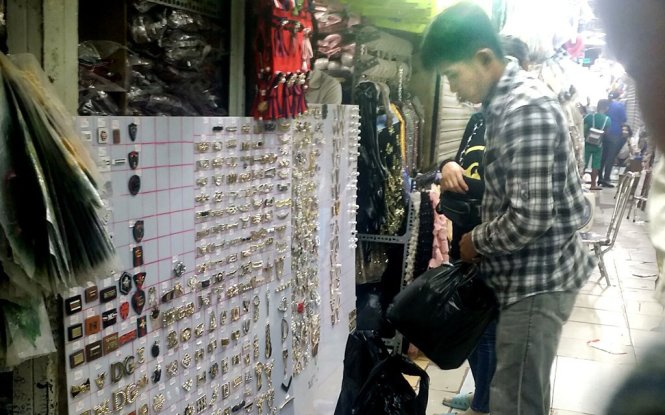 A large number of labels allegedly mimicking those of luxury brands have been seized in at one of the largest marketplaces in Ho Chi Minh City, but in a country where counterfeit products have been rife, many private entities said local authorities need to implement a stringent crackdown on such items.

Over 13,000 supposedly fake labels flagrantly sold at four shops without certificates of origin were confiscated during a raid at Dai Quang Minh Market in District 5 on Monday, according to a representative from the municipal Market Surveillance Agency.

The tags bear the names of famous fashion brands like Gucci and Louis Vuitton, and were intended to be attached to clothes, handbags and shoes.

The agency is contacting related trademark owners to verify their authenticity before subjecting the seized items to destruction or other measures.

The raid took place on the same date as a relevant article run by Tuoi Tre (Youth) newspaper and came at a time when the domestic clothing industry has reported mislabeling on multiple occasions.

Bogus labels were produced in China and Vietnam, and looked no different than real ones, said H.N., general director of a Ho Chi Minh City-based clothing firm.

They reportedly went from markets that publicly offer them to home-based clothing factories where they are joined to products before making their way to local markets and shops.

Companies in the industry have received the greatest financial blow from the practice, said H.N.

What has been worrying Vietnamese manufacturers is not contraband, but counterfeit goods, which account for a large proportion of consumer products in the country, said Hoang Huu Chuong, general director of Nguyen Hoang Exim Co. Ltd.

Chuong suggested that the government step up its effort in market supervision and instigate stricter punishments, citing his observation that competent agencies were still acting at a ‘superficial level’ without exposing all businesses that make fake goods.

H.N. held a similar view and underlined that a solution to the problem involves not just market control bodies but also economic crime police.

“I think punitive measures by competent agencies are just a slap on the wrist,” H.N. said, adding that honest manufacturers will continue to fall victim to counterfeiting as long as the leniency remains.