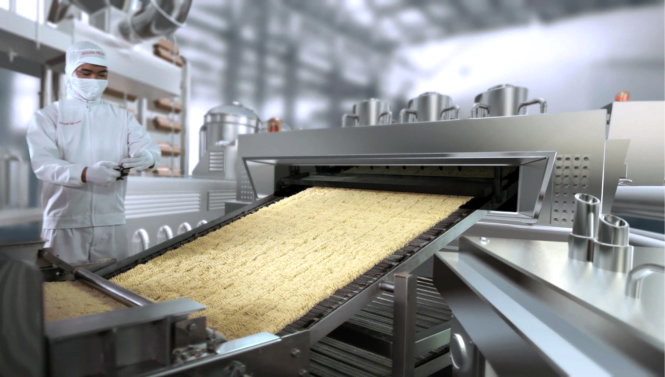 Instant noodle producers in Vietnam are moving toward high-end segments when the market has stepped down from its peak, with domestic products gaining back the market share from foreign players.

High in energy, low in nutrition and sold for as little as a few thousand dong, easy-to-cook instant noodles have been a staple food for Vietnamese over decades and a cash cow for major market players in the country.

But sales of low-end, everyday products have been stagnating in recent years, as instant noodle makers are deploying a ‘premiumization’ strategy to push their customers to purchase more expensive and profitable types of noodles.

According to the World Instant Noodle Association (WINA), Vietnamese people consumed more than five billion packs of instant noodle in 2017, after two years of slumping under this benchmark.

A survey by market researcher Kantar Worldpanel pointed out that on average, a person purchased instant noodles about 18 times last year, meaning that every consumer bought the product more than once a month in 2017.

Although the instant noodle consumption has yet to return to its peak of 5.2 billion units in 2013, the market does show positive signals as Vietnam is currently the world’s fifth-largest country in terms of annual consumption of instant noodles.

Those in the top four positions are China, Indonesia, Japan and India.

A representative of South Korea-based hypermarket Lotte Mart said that a few years ago, when talking about high-end noodles, people only thought of imported noodles from Thailand and South Korea.

“But this segment is now an equal playground for both foreign and domestic instant noodle producers,” the representative said.

“Instant noodles made in Vietnam show the ability to quickly grasp the taste of consumers,” he added.

With the markets for cheap noodles saturated in Vietnam, instant noodle manufacturers are racing to produce higher-value products, from more exotic flavors to more convenient cup noodles that can be eaten straight out of their packaging.

According to a recent survey at more than 200 convenience stores in Ho Chi Minh City by market research company Q&Me, the Hao Hao brand occupies the largest market share in instant packet noodles, while Modern dominates the cup noodles category.

Both brands are under the leading manufacturer of instant noodles in Vietnam, Acecook, whose annual growth is around seven to eight percent.

The company is also promoting the instant products of different kinds of rice-based Vietnamese noodles such as pho, bun, hu tieu, which account for 25-32 percent of its supply.

In the future, Acecook aims to "develop more value-added products such as rice-based, instant noodles with nutritional supplements,” according to Kajiwara Junichi, general director of Acecook Vietnam.

“The growth target of the company in Vietnam is ten to 15 percent," said Junichi.

Not only Acecook, other instant noodles businesses are also focusing on investment in plants, equipment and laboratories to increase quality control and develop new products.

According to experts, enterprises that own modern and superior technology, especially in the production of soup packets, spices, vegetables, and meat supplements to catch up with consumer tastes, will dominate the market.

Ly Kim Chi, chairwoman of the Ho Chi Minh City Food and Foodstuff Association, assessed that many food businesses put more efforts in investing in and improving production techniques and product packaging that meet the high standards of developed countries.

"With the market of a large population, Vietnamese demand for [instant] food has not declined, but increased in accordance with [the improvement of] income, which is the potential for supplying more products in different categories," Chi said.