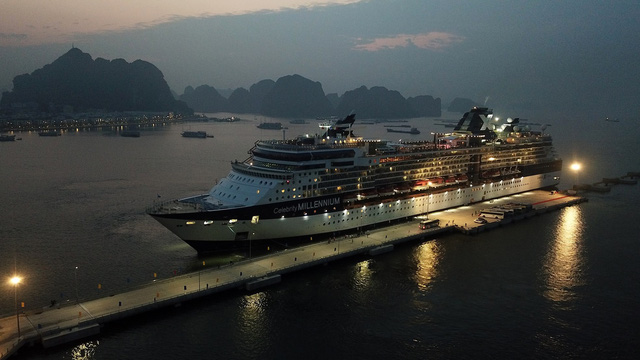 The Hon Gai International Passenger Port in Ha Long City in the northern province of Quang Ninh – the first of its kind in Vietnam – received its first international cruise, which carries 2,000 passengers and 1,000 crew members on board, on Tuesday.

As planned, the Celebrity Millennium, a five-star cruise from the U.S.’s Royal Caribbean Cruise Lines, departed from Hong Kong and docked at the Hon Gai International Passenger Terminal.

The VND1.1-trillion (US$47.3 million) terminal is one of Quang Ninh Province’s major transport projects, with construction beginning on April 2017 under a private-public partnership.

It was designed to have a 524-meter quay that is able to receive two cruise ships at a time, each with a capacity of up to 225,000 GT and the total number of passengers and crew members amounting to 8,400.

The port has been officially put into commercial operation, with the Celebrity Millennium being its first ‘guest.’

At the event, Long noted that having the port in operation is an important milestone in the Quang Ninh tourism industry, creating the most favorable conditions for large passenger ships to access the UNESCO-recognized site Ha Long Bay.

The Hon Gai International Passenger Port is expected to welcome ten international cruises by the end of the year, helping take the number of tourists to the northern province to over 12 million in 2018.

According to plans, the Celebrity Millennium will leave the Hon Gai International Passenger Terminal today, November 28.