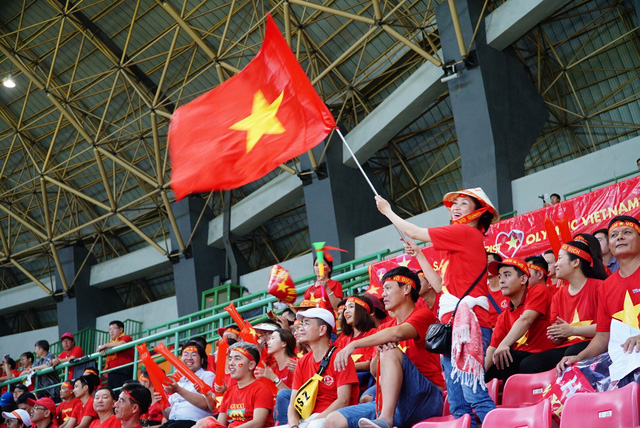 Tours, flight tickets to Malaysia sought after as Vietnam to play ASEAN final in KL

Tour packages and flight tickets to Malaysia have been selling like hot cakes after Vietnam advanced to the finals of the 2018 AFF Championship and are scheduled to play their first leg in Kuala Lumpur next week.

The Golden Stars secured their first AFF Championship final berth since 2008 after defeating the Philippines 2-1 to win 4-2 on aggregate in Hanoi on Thursday night.

Malaysia cruised to the finals on away-goal rules after holding Thailand to a 2-2 draw in Bangkok one day earlier.

Shortly after the referee blew the final whistle in Thursday’s semifinal, Vietnamese fans began to contact tour organizers and air ticket agents to make sure they will be in Malaysia to cheer for their beloved team during the final game in Kuala Lumpur.

Many travel companies told Tuoi Tre (Youth) newspaper they were flooded with requests for tours to Malaysia via websites and social media pages.

A number of diehard fans finished booking their trips to Malaysia even when the ball was still rolling at Hanoi-based My Dinh National Stadium.

“We sold more than 30 bookings before the full-time whistle of the Vietnam-Philippines clash was blown,” a representative of tour operator Saigontourist told Tuoi Tre.

“The number [of bookings] would only spike after the game ended and Vietnam officially became the event’s finalists,” the representative added.

Trips to Malaysia next week, regardless of tour organizers, will be operated in the form of charter tours on an itinerary of three days and two nights, and are priced at VND9.9-16 million ($425.7-688) per guest.

Some packages last five days and six nights so tourists will be able to explore Singapore after watching the football game in Malaysia.

Tour operator Vietravel said that they are offering four charter tours to Malaysia with a capacity of 180 seats per trip, with customers departing from Hanoi, Da Nang and Ho Chi Minh City on flights operated by flag carrier Vietnam Airlines.

To meet rising demand to travel to Malaysia, Vietnam Airlines said that it will add up to two flights from the three Vietnamese cities to Kuala Lumpur on December 11, increasing the total available seats to more than 1,100.

The additional flights will be operated using Airbus A321, departing from Vietnam in the morning and returning on the same night, according to the company.