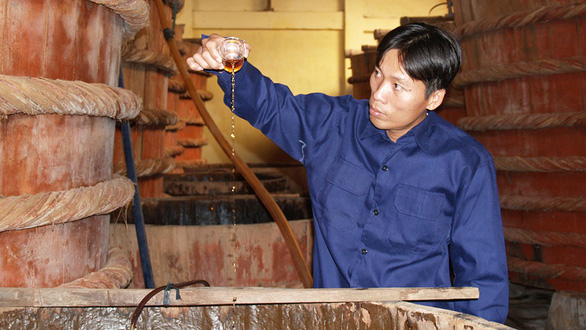 Conventional Vietnamese fish sauce makers have expressed opposition to the draft national standards for the production of the liquid condiment, in which their products, made from natural ingredients, are equated with industrially produced counterparts that have chemical content.

The issue has made headlines in Vietnam for the past week, with several firms and associations in the fish sauce industry calling for rejection or revision of the draft.

The draft standards were proposed and put out to consultation by the Ministry of Agriculture and Rural Development. The proposed norms are to be included in the Vietnamese Standards, the country’s national set of food standards.

According to health experts, traditionally-made fish sauce is much healthier than those industrially manufactured, thanks to a higher level of nitrogen.

Traditional fish sauce is made from anchovies, whereas mass-produced ones have various flavors, including salmon and mackerel.

After the draft national standards for the production of fish sauce were made public, many traditional fish sauce makers said there were more than 50 terms in the document that would cause difficulties and put traditionally-made fish sauce at a disadvantage.

For instance, it includes a term requiring fish sauce makers to control the content of veterinary drugs and plant protection drugs in their products.

The term does not make sense as raw materials for making traditional fish sauce are saltwater fish, not freshwater fish that can be raised using veterinary and plant protection drugs.

Fish sauce firms and associations also whined that the draft national standards were developed in favor of the development of industrial products, criticizing those drafting the document for not differentiating between traditional and industrial fish sauce products.

Several fish sauce makers and associations have sent petitions to Deputy Prime Minister Vu Duc Dam and the agriculture and science ministers, calling for rejection or revision of the draft.

In response, Dao Trong Hieu, deputy head of the drafting committee, said at a press conference on March 8 that they would “continue to solicit feedback from the public before finalizing the document.”