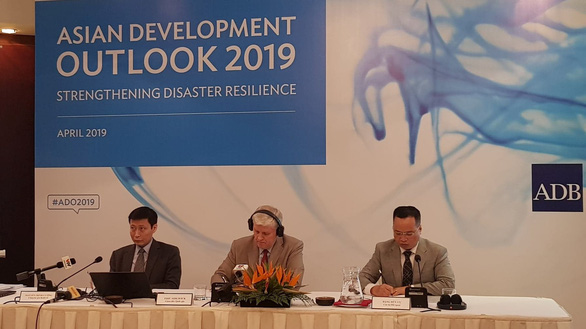 Speaking at a press conference held in Hanoi on Wednesday to announce the publication, ADB country director for Vietnam Eric Sidgwick said that the economic performance in Vietnam reached a sweet spot in 2018, driven by strong exports and domestic demand.

Economic growth will likely hold up well in the near term, supported by export-oriented manufacturing, foreign direct investment, and sustained domestic demand, he said.

ADB said Vietnam's growth will continue to be broad-based, underpinned by robust private consumption, the continued expansion of manufacturing, services, and agriculture, and the greater market access for Vietnam’s exports through various free trade agreements, including the recently ratified the Comprehensive and Progressive Agreement for Trans-Pacific Partnership.

The report also mentioned risks for Vietnam’s economy, at a time when Vietnam’s key trading partners, which are also the world’s major economies, are weakening.

Vietnam is one of the most trade-dependent countries in the region, with trade volume reaching twice the size of its gross domestic product (GDP), according to the report. However, domestically, lackluster progress in state-owned enterprises reform could be a drag on growth.

The report underlined the importance for Vietnam to strengthen private firms’ integration in the global value chains, which is a key policy challenge for the country's long-term growth.