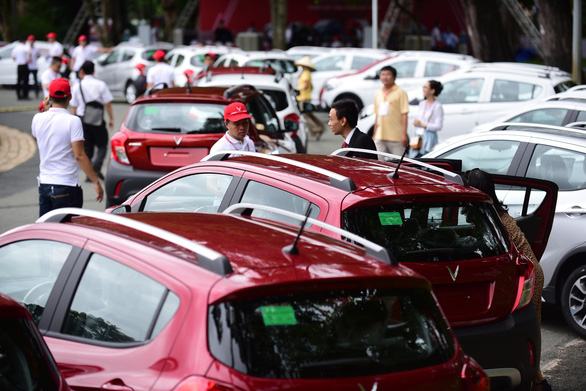 Only three months after placing pre-orders for cars manufactured by VinFast, Vietnam’s first homegrown car producer, customers were able to get behind the wheels of the vehicles as the company delivered its first batch of products on Monday morning.

VinFast, the automotive arm of multi-sector conglomerate Vingroup, held a delivery ceremony for its first batch of four-seater hatchbacks, the Fadil, at the Reunification Palace in District 1, Ho Chi Minh City, today, three days after inaugurating its factory in the northern city of Hai Phong.

Many present and potential buyers had showed up at the venue three hours before the event started. Some of them had to leave Ho Chi Minh City’s neighbors the night before to be able to attend the ceremony.

At 10:30 am, three Fadil cars were moved onstage and their keys were handed over to their respective owners.

Le Hoang Khanh, one of the first three recipients, told Tuoi Tre (Youth) newspaper that he had been anxiously waiting for this day when he could finally drive his new four-seater home, which is in the Mekong Delta province of Bac Lieu.

“I choose VinFast because I want to show my support for Vietnamese-made products,” Khanh said.

Buyers of around 800 other Fadil cars across Vietnam were expected to have the cars delivered to their doors within Monday.

Prior to the event in Ho Chi Minh City, VinFast also distributed Fadil cars to its 32 dealerships and showrooms throughout the country so customers can come and have first-hand experiences with the vehicles.

VinFast only unveiled its first made-in-Vietnam cars to the public in Hanoi and Ho Chi Minh City in November 2018, and started taking pre-orders for Fadil and two other models, the LUX A2.0 sedan and LUX SA2.0 SUV, in March this year.

According to the company’s plan announced last year, VinFast will continue to deliver the sedan and SUV models by the end of this year.

On Friday last week, VinFast opened its car-making plant in Hai Phong. The facility, covering more than 500,000 square meters at Dinh Vu Industrial Park, is designed to manufacture 250,000 cars each year in the first phase, and 500,000 per year in the second phase.