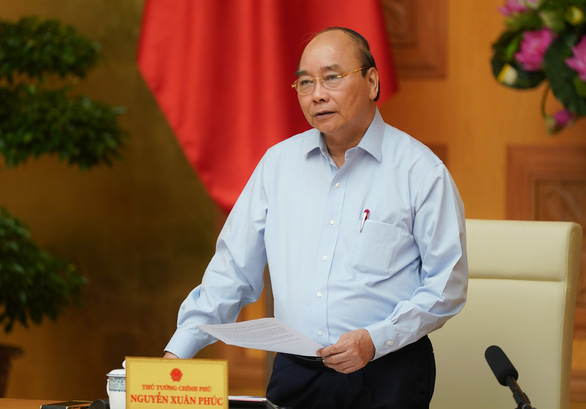 Vietnamese Prime Minister Nguyen Xuan Phuc has asked his economists to devise a master plan which would help stimulate the economy beyond this year as the coronavirus-triggered economic slowdown has made adverse impacts on Vietnam.

The head of government was speaking at a meeting with members from the National Advisory Council for Financial and Monetary Policies in Hanoi on Thursday.

The economists said the region and the world will further see complicated and unpredictable changes as the novel coronavirus disease (COVID-19) pandemic may last long.

Therefore, the government should make economic recovery policies not just for this year but also for the next two years.

Economist Vo Tri Thanh said the government needs to speed up the execution of the VND62 trillion (US$2.7 billion) stimulus package for coronavirus-stricken individuals and businesses and financial support in the form of more than VND180 trillion ($7.7 billion) worth of delayed tax and land rent collection for companies.

Sharing a similar view, Dr. Tran Du Lich added policies should be long-term oriented since more sectors, especially labor-intensive ones, are predicted to be suffering the brunt of the virus crisis in the third quarter of this year once their contracts are disrupted.

Economist Bui Duc Thu suggested the government should come up with special policies to further shore up business restructuring that may cover inputs, investment and labor, and increase the resilience of the economy.

The strength of businesses, especially small- and medium-sized enterprises, remains limited, according to Tran Dinh Thien, former director of the Vietnam Institute of Economics.

Aside from aiding businesses, the government needs to promote innovation, said Thien, adding that under difficult circumstances, measures to tackle bad debts need to be taken into account.

The state needs to become “the largest buyer of made-in-Vietnam products,” he said.

Several economists suggested the government scale up support packages, especially ones targeting the aviation sector. Domestic stimulus measures need to be geared toward tourism, retail, and consumer credit as well.

The council proposed formulating the long-term economic stimulus plan which would identify and resolve key issues, such as state budget deficit, resource mobilization for manufacturing and business activities, and the removal of business obstacles among individual and business stakeholders.

In response, the prime minister stated the plan must work out those issues which need to be fixed, including overspending and support for businesses.

A prerequisite is to prevent a second wave of COVID-19, according to the economists.

They called for the proactive execution of fiscal and monetary policies in order to maintain macroeconomic stability and bolster economic growth.

They suggested the government allow credit growth of more than ten percent this year and the next, and increase the state budget deficit and public debt caps by around three to four percent of gross domestic product.

The move is intended to secure more resources to aid small- and medium-sized enterprises, as well as major enterprises, while minimizing manufacturing disruptions to key sectors.

The economists called on the State Bank of Vietnam to consider slashing bank interest rates for individual and corporate clients.

They also urged authorities to cut recurrent expenditures, while deferring, reducing, and exempting taxes, fees, and charges for the business community.

The prime minister stressed the need to step up the disbursement of public investment, saying capital would be moved from those localities which are slow in disbursing the funding to other locales.

The fundamental reform of institution and policy is needed to create a more competitive business environment on a regional and international scale so that Vietnam will attract more private and foreign investments, according to PM Phuc.