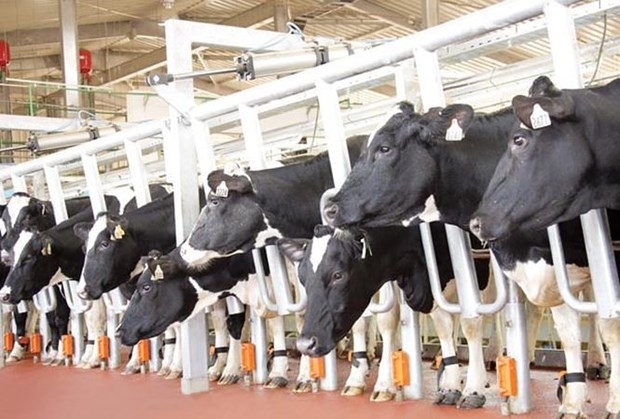 Vietnamese milk producer TH Group has initiated the construction of a high-tech, concentrated dairy cow complex worth over US$109 million in the Central Highlands province of Kon Tum.

The construction of the dairy cow project began in Mo Rai Commune, Sa Thay District, on Friday, according to the Vietnam News Agency.

With dairy cow farms and a milk processing plant, the project, built at a cost of VND2.54 trillion ($109.5 million), will be the largest of its kind in the Central Highlands upon completion.

Covering 441 hectares, the project features two farming models, with the first consisting of a cluster of farms spanning 60 hectares and a field of meadows occupying 378 hectares.

The farm cluster is set to raise 100,000 cows, using cutting-edge technologies from Israel.

Meanwhile, the second model targets 20,000 cows, with the participation of about 2,000-4,000 households in Sa Thay District and adjacent areas.

Farmers will receive support in accessing bank loans to buy dairy cows and build breeding facilities, in veterinary medicine, and in milk sales.

TH Group will continue pursuing a closed-loop production system in the project, and plan to roll out similar projects in the Mekong Delta province of An Giang and the northern province of Cao Bang, aiming to expand its cow herd to 400,000 heads by 2025.