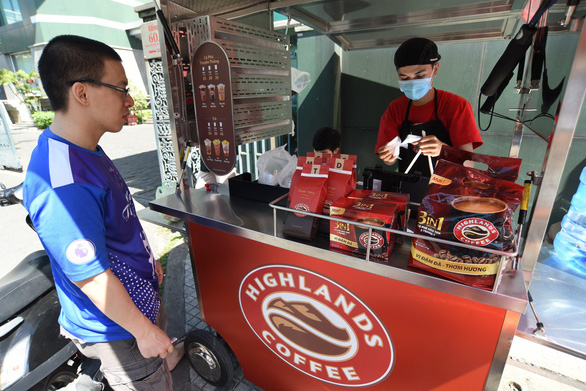 With a handful of advantages including low investment, simple operations, and fast profit, the companies behind these businesses said that they would expand their network of mobile stores and takeout kiosks after a test run.

A takeaway kiosk of Filipino-owned coffee chain Highlands Coffee has been placed on Tran Khac Chan Street near the Phu Nhuan intersection in Phu Nhuan District, Ho Chi Minh City for a week.

The stall offers carryouts at prices VND4,000-5,000 cheaper than those at Highlands Coffee bricks-and-mortar stores.

A representative of Highlands Coffee said that the brand has set up similar takeout kiosks across many streets in the southern metropolis over the past month, attracting a large number of customers.

Currently, the chain has about 39 takeout stalls, most of which are situated in big cities like Ho Chi Minh City, Hanoi, and Can Tho in the Mekong Delta.

According to representatives of these coffee chains, their target customers are young people.

Since the beginning of this year, aside from the aforementioned chains, several other coffee brands in Vietnam have moved to the takeout model as their revenues from traditional stores have fallen steeply due to the COVID-19 pandemic.

“It is estimated that about 70 percent of café owners have suffered losses this year as cafés and restaurants have operated for a shorter time [than normal] while rent remains unchanged,” said Hoang Van Tien, CEO of the Coffee Bike chain, referring to the times when cafés and restaurants were temporarily closed during social distancing periods.

Tien said that his chain has had to shut down ten out of its 15 traditional stores this year. Instead, it has opened 35 roadside stalls.

In addition to Ho Chi Minh City, the chain has also made its presence in Hanoi, and the southern provinces of Dong Nai, Binh Duong, and Binh Phuoc.

According to a franchisee of a takeout coffee chain in Ho Chi Minh City, low investment is one of the perks that come with the takeaway model.

It required an investment of about VND350 million ($15,186) to open a traditional café, whereas the amount required for a mobile kiosk can be as little as VND50 million ($1,165), seven times cheaper.

“It is not to mention such a stall needs only two workers for smooth operations,” the businessperson said.