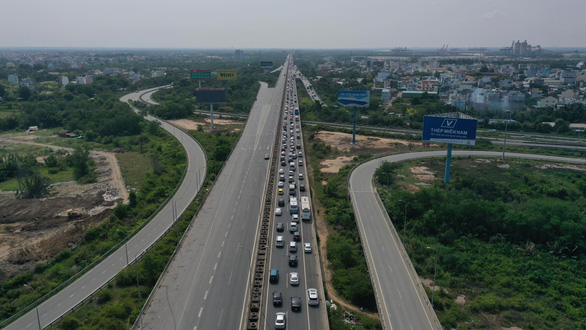 Doubling the width of the Ho Chi Minh City - Long Thanh - Dau Giay Expressway from four lanes to eight lanes will carry a US$500 million price tag, the project management board has said.

In a report sent to the Ministry of Transport, the My Thuan Project Management Board shared that around VND11,505 billion ($502.5 million) will be needed to widen the 24-kilometer section of the expressway connecting the southern city with Long Thanh District and Dau Giay Town in neighboring Dong Nai Province.

Of that sum, VND8,306 billion ($363 million) will be spent on contruction, VND405 billion ($17.7 million) on site clearance, and the rest on management costs, consultant fees, and contingency expenses.

The expansion project is expected to be completed by 2025.

Justifying the need for the project, the management board explained that the expressway, which was first put into operation in 2015, has become increasingly congested in recent years, particularly on holidays.

The section to be widened runs from An Phu Ward in Thu Duc, a municipality administered by Ho Chi Minh City, to Bien Hoa - Vung Tau Expressway in Long Thanh.

As recommended by the project’s consultant, the first section will be widened by 9.5 meters for a total width of 36 meters, and the second will be expanded from 15 meters wide to 42.5 meters wide.

Following the expansion, each section will consist of eight lanes.

The speed limit on the first section will be 100 kilometers per hour and that on the second will be 120 kilometers an hour.

The Long Thanh Bridge on the expressway will be expanded by 19.75 meters to reach a total width of 52.5 meters with its speed limit set at 100 kilometers per hour.

The expressway’s remaining section, from Long Thanh to Dau Giay, with a length of 31 kilometers long, will be left untouched.