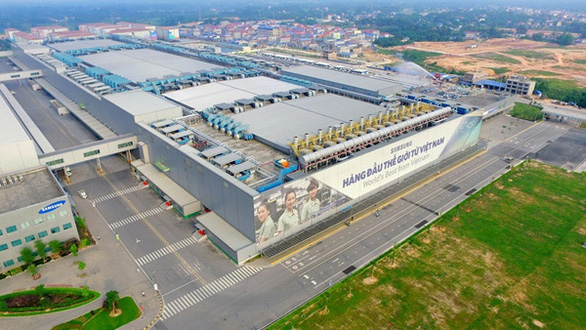 Vietnam will remain an attractive destination for foreign investors in the long run once the COVID-19 pandemic is put under control, said the leader of Samsung Vietnam at an online workshop on Monday.

Assessing the prospect of FDI attraction in Vietnam in the coming time, Ho said that Samsung Vietnam is building a research and development (R&D) center worth over US$220 million in Hanoi.

This center will research and develop 5G technology, large databases, and artificial intelligence in Vietnam, contributing to upgrading the Samsung complex here.

If Vietnam can effectively contain the pandemic while maintaining circulation of goods and ensuring supply chain operations, FDI inflows in the Southeast Asian country will continue increasing in the long term, the Samsung leader said.

Choi also affirmed that the South Korean conglomerate will not change its investment strategy in Vietnam even though the fourth wave of COVID-19 epidemic has been wreaking havoc on manufacturers in the country.

Over the first six months of this year, Samsung Vietnam managed to sustain its manufacturing and export activities, and it will achieve this year’s export target if its factory based in Ho Chi Minh City resumes operation soon.

In the coming time, Samsung will continue to expand production and invest in equipment at its six factories in this country, the general director said.

Previously, Samsung mainly invested in manufacturing and assembling, but in the near future, the group will raise investment in the R&D segment to build Samsung Vietnam into a major global production base,” Choi emphasized.

Similarly, Binu Jacob, general director of Nestlé Vietnam, which currently operates six factories in Vietnam, said the group will build a new factory in southern Dong Nai Province within the next two years at a cost of $132 million, thereby turning Vietnam into Nestlé's production center in Asia and Oceania.

From the beginning of this year to September 20, the total of newly and additionally registered FDI capital in Vietnam reached $22.15 billion, up 4.4 percent from a year earlier, according to the Ministry of Planning and Investment.

This increase in FDI shows investors' confidence in the domestic investment environment in the long run, although the country’s economy has faced a lot of immediate difficulties caused by the pandemic, said Nguyen Thi Bich Ngoc, deputy minister of planning and investment.

In the latest Vietnam Macro Monitoring report released on September 15, the World Bank Group reported that Vietnam’s FDI commitment in August amounted to $2.4 billion, marking a 65 percent rise compared to a month earlier.

Except Cao Bang, the coronavirus has spread to 62 of the country’s 63 cities and provinces, with Ho Chi Minh City suffering the most with 376,314 infections and 14,501 fatalities, followed by its neighbors Binh Duong and Dong Nai Provinces.