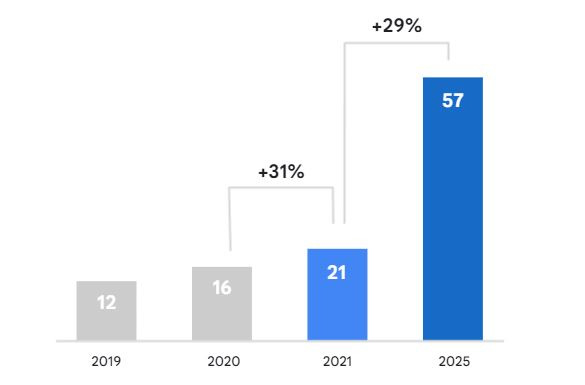 Vietnam’s digital economy is predicted to hit US$220 billion in Gross Merchandise Value (GMV) by 2030, ranking second in Southeast Asia, according to a report by Google.

Providing a ten-year outlook, the report highlights that the Southeast Asian region is on the path to become a $1 trillion digital economy by 2030, of which Vietnam could record $220 billion in GMV, second to Indonesia with $330 billion.

According to the report, Vietnam’s GMV is expected to grow by 31 percent to $21 billion this year, thanks to a 53 percent year-on-year increase in e-commerce, and to $57 billion by 2025.

The country has seen eight million new digital consumers since the start of the COVID-19 pandemic in early 2020, of whom 55 percent are from non-metro areas.

Ninety-nine percent of the new consumers intend to continue using the digital services, while satisfaction with the services sit at 83 percent.

About 30 percent of digital merchants believed that they would not have survived the pandemic if not for digital platforms, the report stated, adding that these sellers use an average of two digital platforms.

About seven out of 10 businesses are expecting to increase usage of digital marketing tools in the next five years.

Vietnam remains a very attractive innovation hub, and global capital continues to pour into the country given its strong growth fundamentals and growing digital ecosystem, according to the report.

Investment appetite remains strong in digital services that surged as a result of COVID-19, such as e-commerce, fintech, healthtech, and edtech.

The pandemic has proved that Vietnamese people are resilient and are capable of adopting new technology rapidly, said Tram Nguyen, Google Country Director for Vietnam, Laos and Cambodia.

The reports cover six countries in the region, including Indonesia, Malaysia, the Philippines, Singapore, Thailand and Vietnam.