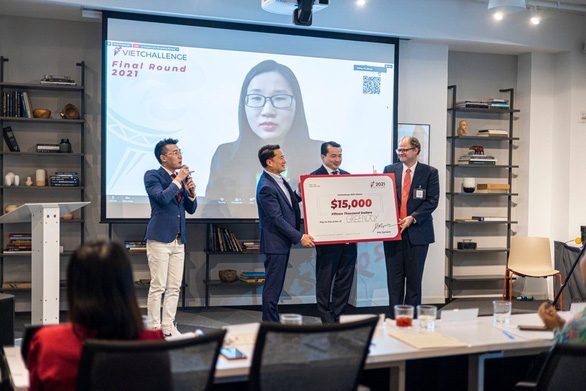 GreenJoy, a Vietnamese producer of biodegradable straws, was announced the winner of the international startup competition VietChallenge 2021 in its final round held in the U.S. over the weekend.

The company was also awarded a cash prize of US$15,000 at the New York event.

Vietnam’s Ambassador to the U.S. Ha Kim Ngoc and United Nations Ambassador Pham Hai Anh were among the attendees.

Kicking off in June, VietChallenge 2021 is the sixth season of the annual competition which seeks to “award the most promising startups with seed funding, industry connections, and investment opportunities,” according to the competition’s official website.

Applicants had three months from June until September to enter their business into competition, with this year’s theme being 'Continuum.'

Teams from around the world brought diverse business models to VietChallenge 2021, offering sustainable development solutions in areas such as robotics, education, blockchain, technical services, and environmental studies, the organizers said.

Five finalists, including GreenJoy, were announced on November 27.

The Vietnamese startup impressed judges during final-round presentations and Q&A sessions to bring home the championship as well as $15,000 in cash.

Speaking remotely during the live-streamed event, GreenJoy founder and CEO Vo Quoc Thao Nguyen expressed happiness to have overcome other heavyweights to claim the top prize.

Its other products include purses, baskets, and cup sleeves made from the same plant.

GreenJoy says they are cooperating with over 50 farmers, more than seven college laboratories, and a number of non-governmental organizations and government agencies.

It has sold over 30 million straws in Vietnam and to other countries.

The company previously won a third prize at the Blue Venture Award 2019 for startups.

After winning VietChallenge 2021, GreenJoy donated a third of its cash prize – $5,000 – to the Carry Forward campaign, which provides support for children and students severely affected by the COVID-19 pandemic.

By the end of the competition’s final round, Carry Forward had raised $230,000 from donors.

The campaign is held in collaboration with organizations such as STEAM for Vietnam, Vietseeds Foundation, Stay Strong Saigon, VietBay, and VietChallenge

Funds from the campaign will be used to award scholarships and provide financial aid and Chromebooks for children and students affected by the pandemic.

Apart from the main competition, VietChallenge also partnered with HUB Global to organize a seminar to share insights on investing in blockchain projects.

Guest speakers included established investors and entrepreneurs in the fields of cryptocurrency, technology, and finance from Asia and the U.S..