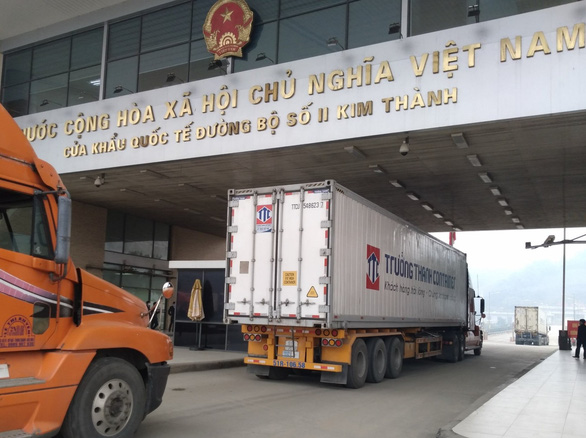 Some 1,000 container trucks of fresh fruits are stuck at a border gate in Lao Cai Province, northern Vietnam due to a slowdown in Chinese customs clearance, prompting local authorities to stop receiving trucks carrying exports to China.

The decision came as nearly 1,000 trucks are currently waiting for customs clearance by Chinese customs forces to enter the Chinese province of Yunnan for goods delivery, the Lao Cai administration explained.

As Chinese authorities have been tightening COVID-19 prevention measures in border areas, the customs clearance process by the Chinese side for exports from Vietnam has significantly slowed down, leading to the congestion, Lao Cai authorities elaborated.

This stagnation came only four days after the Yunnan authorities announced the resumption of receiving exports from Vietnam on January 12, following five months of suspension since July last year due to China's detection of the coronavirus on packaging of Vietnamese dragon fruit imports.

From January 12 to 15, only 60 container trucks carrying fresh fruits were cleared through Chinese customs formalities to enter Yunnan, equivalent to only 15 to 20 trucks per day, which is considered a snail's pace.

Meanwhile, hundreds of vehicles have entered the border gate area every day over the past several days, overloading all warehouses and truck yards there, Lao Cai authorities said.

The suspension is necessary to ease the congestion, prevent fruits from being rotten owing to long storage in unsatisfactory conditions at the border gate, and minimize costs and damage for exporters, the local administration expounded.

The provincial administration said it will work with Yunnan authorities to expedite the progress of customs clearance at the Kim Thanh - Beishan border gate pair.

Vietnamese exports had been blocked at border gates with China for the same reason before, not only in Lao Cai but also in some other northern provinces.

Among the affected provinces, Lang Son and Quang Ninh have decided to cease receiving trucks of fresh fruits bound for China from January 17.