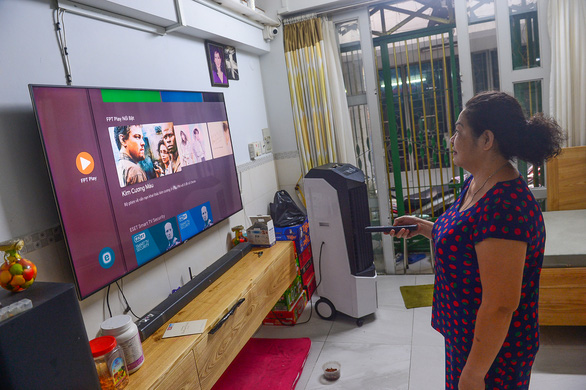 Domestic providers of pay-TV services via over-the-top platforms (OTT TV) are faced with inequality in competing with their foreign competitors in Vietnam, prompting Vietnamese agencies to make proposals toward fair competition in the industry.

After three years of trial operation, OTT TV, also called online TV, was officially commercialized in Vietnam in 2016 and has since become familiar to Vietnamese viewers, especially when people stayed more at home during the COVID-19 social distancing drive from May 31 until the end of September last year.

The Southeast Asian country began to reopen the economy in its new strategy of living safely with the coronavirus in October.

Along with the increasing popularization of OTT TV in such a context, unfair competition has taken shape between local and foreign service providers.

Vietnam now has 22 OTT TV operators, including domestic giants with strong telecommunications infrastructure such as FPT which offers FPT Play, Viettel with Next TV, and VNPT with MyTV, according to the Ministry of Information and Communications.

Besides the big names are other producers whose outstanding OTT content is attractive to large numbers of subscribers, such as Galaxy Play, VieON, ClipTV, and some others.

These local enterprises have been competing with their foreign counterparts that provide cross-border OTT services in Vietnam, thanks to the boom of broadband Internet, with prominent players like Netflix, WeTV, IQIYI, iFlix, and Apple TV.

As regards technical infrastructure, large domestic firms including FPT, Viettel, and VNPT have some advantages in transmission lines and proximity to domestic users, according to experts.

In respect of content, domestic OTT TV is much better in the field of television and sports, especially live programs, while its foreign counterparts excel in movies and video on demand.

Cross-border OTT services are dominating the Vietnamese market in terms of revenue.

Netflix had 1.6 million subscribers in Vietnam in early 2020, while the corresponding figures for WeTV and IQIYI were over 630,000 and 445,000 users, according to the statistics of App Annie – an app ranking, analytics, and market intelligence platform.

With such a subscriber count, Netflix might earn revenue of up to VND320 billion (US$14.06 million) per month in Vietnam if applying an average monthly charge of VND200,000 ($8.8) per subscriber.

This figure has since increased along with the development of cross-border OTT TV services in Vietnam, experts said.

Such foreign-provided services have yet to be licensed by the Ministry of Information and Communications whereas their content has not undergone any editing and control before being transmitted to clients.

Unedited OTT TV content may provide users with misleading conceptions, including those that are detrimental to the country in various aspects such as sovereignty and traditional culture, the ministry said.

Besides not being subject to content control, foreign OTT service providers are not paying any tax in Vietnam, an inequality for local competitors.

Many local OTT TV providers said they have to comply with all regulations on licensing and content editing and pay all related taxes and fees.

Tax obligations put a lot of pressure on domestic players when they calculate how much they can charge end users for content, a director of a domestic OTT provider whined.

Without being subject to editing, cross-border OTT TV services have broadcast content much more rapidly to subscribers than their local rivals, reflecting one more inequality, according to Vietnam’s Viettel Military Industry and Telecoms Group.

In order for domestic OTT businesses to be able to compete with their foreign rivals, they need to improve technology, techniques, and services, not merely content, said film and TV show producer Do Quang Minh.

There should be regulations to prevent inequitable competition between local and foreign service providers and to bar misleading or harmful content from being disseminated via such platforms, according to the ministry’s Department of Broadcasting and Electronic Information.

In its recent report to the central government, the lawmaking National Assembly, and the Central Propaganda and Education Commission, the Vietnam Pay Television Association (VNPayTV) set out some proposals on the operations of cross-border OTT TV services.

VNPayTV pointed out that these services are yet to be licensed or censored by Vietnamese authorities, which poses potential risks, including those of national security.

It requested that any foreign providers of such services in Vietnam apply for an operation license, undergo editing and censorship, and be sanctioned for law violations, if any, as prescribed in the Law on Cinema, the Press Law, and other relevant legislation.

Revenue earned by foreign OTT TV providers from their operations in Vietnam must be subject to applicable taxes as prescribed by law, the association underscored.