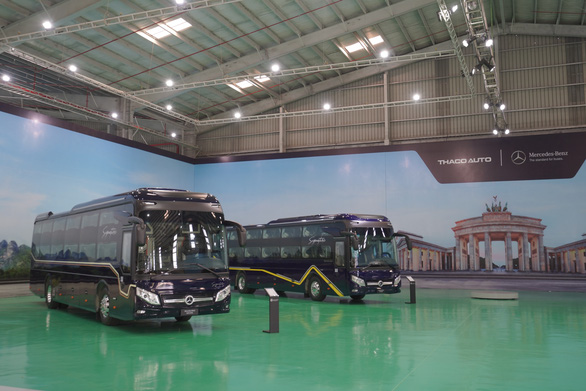 THACO Auto, owned by billionaire Tran Ba Duong, has launched a partnership with Daimler Bus which will allow it to assemble Mercedes-Benz-branded buses for the Vietnamese market and eventually begin exporting these vehicles to nearby countries.

THACO organized a ceremony on May 21 to announce its strategic partnership with Daimler Bus and launch its Mercedes-Benz bus assembly plant in Chu Lai, Quang Nam Province.

The company aims to expand its reach and diversify its products to meet the needs of both local and international markets.

They are all available at truck and bus showrooms nationwide.

THACO’s partnership with Mercedes-Benz has been in the works for many years.

The first milestone for the partnership was hit in December 2017 when THACO and Daimler signed a technology transfer agreement which allowed the former to distribute trucks and FUSO buses in Vietnam.

In 2018, the two firms launched a Mercedes-Benz Bus development project in Vietnam with a vision toward outbound shipment.

Around this time, the partnership shifted its focus toward designing and developing Mercedes-Benz bus lines capable of handling topography and traffic in Southeast Asia.

THACO has also upgraded the production lines at its bus factory in order to meet modern technical requirements and Mercedes-Benz standards.

Implementing its 'joining the global chain value with international automakers in the Vietnamese market' strategy, THACO has teamed up with a coterie of leading auto groups from around the world to design and manufacture internationally branded buses capable of serving the ASEAN market, according to Nguyen Quang Bao, general director of THACO.

“THACO’s high-class bus model under the Mercedes-Benz brand marks a key milestone in the partnership between THACO Auto and Daimler,” Bao said.

With the COVID-19 pandemic now under control in Vietnam, THACO hopes to ramp up its production and business activities to meet the increased demand for daily community solutions.

Harald Schmid, CEO of Daimler Bus Commercial Vehicles in Southeast Asia, said that Mercedes-Benz buses are manufactured at the THACO Bus plant on the O500 1836 and O500 1843 chassis, and are equipped with the latest technologies to make the buses suitable for the Vietnamese market.

“The Mercedes-Benz bus, which was launched today, will become a symbol and pinnacle of superiority in the bus market in Vietnam and in Southeast Asia in the coming time,” Schmid said.