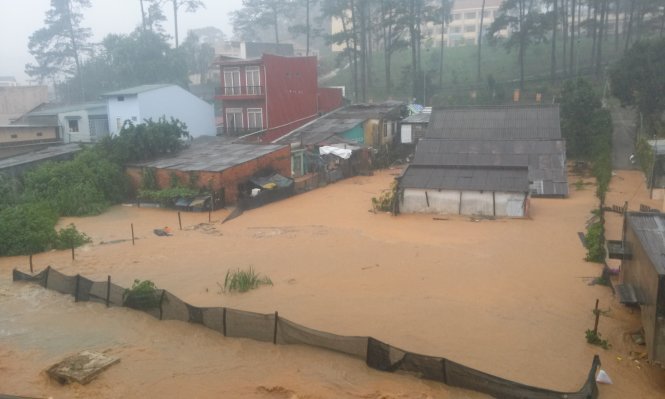 No more urban flooding, scorching heat in Vietnam in 2035

Editor’s note:  Le Cong Si, an architect from the Mekong Delta province of Tra Vinh, hopes Vietnamese cities and townships would no longer suffer from urban flooding and sultry heat and would be better resistant to climate change in his entry to the “Ky Vong Viet Nam 20 Nam Toi” (“My Expectations for Vietnam in 20 Years”) writing contest.

I hope that in the 20 years to come, Vietnamese municipalities would be filled with lush foliage overhead and babbling streams, which give the cities an unmistakenable identity.

Among the countries which are most gripped by climate change, Vietnam has faced numerous environment problems. Adverse impacts by climate change are profuse, and those faced by urban environments include flooding, irregular weather patterns and extreme scorching heat.

Urban flooding, which has long been a tricky problem for the government, has been exacerbated by rising sea levels sparked by climate change. Flooding has long plagued old townships with outdated infrastructure, and has now become a “specialty” of new cities. Towns with terrain which allow easy drainage, like Da Lat, are no longer immune to the “curse.”

Downpours in late May and early June triggered inundation and flashfloods which took a heavy toll on Da Lat, a Central Highlands resort city standing over 1,500 meters above sea level. The calamity caught many by surprise.

Climate change is also the culprit behind the record hot spell and drought which have pervaded many provinces and cities for the past several months, causing the air in cities to be more stifling.

First, simple anti-flooding measures that city governments have adopted should be stepped up. Such measures include maximizing the sewage system’s capacity by carrying out upgrades and dredging canals on a regular basis.

A long-running solution to urban inundation is zoning. We cannot elevate an entire city’s height simultaneously to prevent it from being immersed. Zoning is thus needed for water regulation reservoirs and sewage systems with adjustment valves. It’s vital that canals not be occluded to save room for mushrooming construction projects, as has happened in recent years.

Building satellite cities is an inevitable development trend. However, new cities zoned on high foundations have inadvertently placed their older counterparts in a hollow, susceptible position, and thus aggravated flooding there. Infrastructure in different locales should be connected synchronously in future zoning.

The inundation of Da Lat following downpours on May 31 is put down to the rampant construciton of greenhouses for agricultural purposes, which has seriously hampered surface water absorbence. This is an example of unsynchronous zoning. To reduce risks, it’s of the essence that zoning in different sectors, including construction, be placed in the overall socio-economic context.

The Netherlands, with half of its territory sitting below sea level, has always set a good example in how to effectively cope with flooding. The European country boasts an awe-inspiring system of crisscrossing rivers and canals, which is ideal regarding drainage and adds to the country’s tourist allure. The country’s experiences and efforts in tackling inundation and managing water resources have been highly appreciated by the global community.

The entire country is surrounded and cemented by large dykes and bridges which can be adjusted to allow waterway traffic to connect to canal-separated housing blocks.

The principle of forming the city of Amsterdam on canals, which was introduced in the 17th century, still thrives to date. The Rotteram administration has recently passed its zoning until 2035 to build the “Rotterdam Water City,” which boasts three component projects to build a river city, canal city and water city.

Each of the projects incorporates strategies to convert water sources from hazards into urban development opportunities.

The Rotterdam administration’s flexible, sustainable approach to urban flooding is worth our imitation.

Secondly, the Ministry of Construction should consider adjusting zoning benchmarks to be adopted in cities, particularly new ones, so that greeneries inside the cities and within newly built structures, including individual houses, will be expanded. The implementation of such zoning also needs strict surveillance.

It’s advisable that spontaneously grown vegetaion be maintained and stringent penalties be imposed on tree felling. Expanded greenery not only has a positive climate and environment impact, but also boosts self-absorbence and minimizes flooding risks.

Better adjusting ourselves to climate change is synonymous with cutting down on greenhouse effects. It’s urgent that production and construction activities be carried out in a modern, sustainable way. Research and production of environmentally friendly products should be stepped up, and construction projects should be allowed easy access to these materials.

Despite enhanced aesthetics and the improved skills of local architects and constructors, which have brought about gorgeous urban looks, Vietnamese cities’ identity remains a big question.

Such quests for materials to create smart, energy-saving structures which also adjust well to climate change and are rich in identity should be encouraged. Auspicious conditions should also be created to turn innovative ideas into reality.