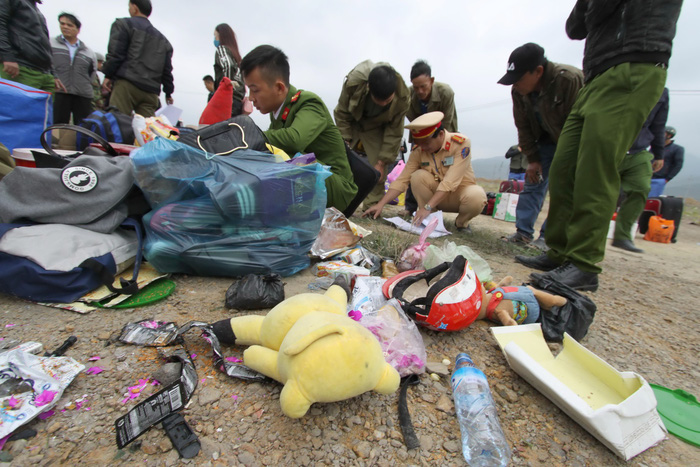 A number of tourists and expats in Vietnam have shared their thoughts on traffic safety in the country following a request made by Tuoi Tre News in the wake of hundreds of driving-related causalities recorded during the Lunar New Year holiday.

Anything can happen when driving in Vietnam

It appears that the Vietnamese attitude towards driving is completely different than my impression on the Vietnamese attitude towards beauty, friendliness and strong family ties. In traffic it seems as if the prevailing attitude is, “me, me, me” or “ I'll do whatever I want, and you should be responsible for not hitting me, no matter what stupid, dangerous and selfish thing I do.”

I feel that it is much more dangerous to drive in Vietnam than the USA and other countries in the developed world. The reason for this is that Vietnamese drivers often ignore traffic regulations and do whatever they want. This includes driving against traffic, not stopping at red lights and not looking when turning on to large roads.

I’ve seen a number of minor and major accidents in Vietnam but am still surprised that I don’t see more.

To be a safe driver in Vietnam, one must be aware that just about anything can happen on the road. People stop to answer their phone (in the middle of the traffic lane), farmers dry rice, pepper, or coffee on the road shoulder, and people drive towards you in your lane. To be safe, the driver must look out for all these, and many other, potential dangers.

I think the first thing needed in order to fix the problem is to obey and enforce traffic laws. Vendors and sellers should also be prohibited from blocking the right lane to sell goods and cars should not be allowed to park on the side of the road during rush hour.

Steverino from the U.S.

There are unwritten rules

Dealing with traffic in Vietnam is a special experience. Initially all seems chaotic but there are definitely some unwritten “rules”:

“Rule” 1: everybody is expected to vigilantly look out for incorrect or risky behaviors from others, failures of infrastructure (holes, obstacles, etc.), phantom drivers, and bikes and other vehicles' driving at night without lights.

“Rule” 2: The “let’s get on’, let’s advance” attitude means adjusting directions of movement instead of going slower or stopping; using all free space, allowed or not; continuing to drive in the first seconds of a red light; turning right at any red light, in spite of pedestrians having the green light and without slowing down.

In my country, there are some practices that are different. Belgium invests a lot in speed control systems and the penalties for breaking traffic laws are high. Meanwhile, weak road-users (pedestrians, cyclists) are protected, especially at crossing points. Also, driver and traffic education are part of the school curriculum beginning at an early age.

Alcohol is one part of the problem

The cause of serious traffic accidents is mostly due to speeding, reckless overtaking, and drunken driving, mainly by motorcycles. It is still hard for me to define exactly how Vietnamese people ride but what I can briefly say is that people here don’t clearly separate lanes for cars and motorbikes. Also, they jam their motorbikes into wherever they can, even if it is a very narrow space between two cars. Many times I see people riding on the walking path, an unacceptable violation in Thailand. They also cut each other off while driving by veering left and right.

When people drink, things often get worse. These, in my opinion, are the major factors that lead to accidents in Vietnam. Creating new social values and enforcing strict laws may help solve the problem. It is surprising that most people know the main cause of the accidents during festival time is alcohol but still choose to drive drunk. This might be a sign that campaigns by the government, private sectors, and NGOs such as “Don’t Drink and Drive” or “Responsible Drinking” are not working. In Vietnam, drinking is a part of the culture. It is hard to avoid drinking when you are a man. To be sure, it is even more difficult to reject an offer to drink by an older person. The end result, however, is sometimes too much and getting into fights or drunk driving.

Your life is more important

I had never experienced anything like the traffic in Vietnam before arriving in the country and was very shocked at first. Whenever there are more people and bikes on the street, such as the holidays, it gets more chaotic and often more dangerous, which is why I can see that there are more accidents around this time. However, I have a lot of respect for the driving skills of the Vietnamese people. I have definitely learned a lot from watching people on the road here.

From observing traffic in Ireland and other Western countries, it appears that Vietnamese traffic is far more chaotic and unpredictable. In general though, I find it fairly easy to get around the city as the traffic flows pretty smoothly and most drivers try to drive safely (though there are exceptions). I have definitely seen much worse in other countries, such as India.

One of the biggest things I notice is how people don't check their rear or side before crossing through traffic or turning around a corner. Often people wear hoods to protect themselves from the sun but this actually limits their field of vision, meaning they actually can't see what's around them while driving. This can be a hazard to other drivers.

To all the Vietnamese drivers out there, I would just like to say: your life is more important than getting to your destination quickly.

Many people use Tet as a reason to behave badly, particularly by engaging in such behaviors as drunk driving, littering, and playing with firecrackers. During the two Tet holidays I’ve spent here, I witnessed many scuffles and traffic accidents caused by alcohol. Foreigners who travel to Vietnam during the Tet holiday often witness these scenes in downtown areas and are left with a bad impression of the country.

I personally think Vietnamese people having fun during Tet should know their limitations in order to help maintain the beautiful image of a peaceful Tet. Recently, many foreigners have begun to flock to Vietnam for travel and work. In particular, Tet is also a chance for them to experience the culture and traditions of the country. Therefore, I think keeping the environment safe during Tet is also a way to build the image of a friendly, peaceful country in the eyes of international friends.

From what I have seen in Vietnam regarding driving skills, there seems to be a lack of awareness and common sense. It doesn’t help that everyone is always in a rush. There’s very little order on the roads, some people drive their bikes way too fast, and buses don't have any respect for anyone but themselves. I also find people in general would rather beep their horn than press their breaks.

To avoid accidents, there could be more awareness based on who and what is around us while we drive. Pay attention to what we’re doing and what other people are doing as well. Please obey the traffic laws. They are designed to protect us and save lives.

Many people drink and drive but most of the time they get lucky. We all think nothing bad will happen to us, but sometimes reacting to difficult driving situations requires sober attention. If you know you’re going out to drink leave your keys at home and take a taxi. Life is precious.

Wayne Jordan from the UK

Usually drivers here lack patience. They take advantage of each centimeter and don’t allow traffic to flow, especially at crossroads. Also, drunk drivers in Vietnam are irresponsible. They seem not to worry about their families and other road users. In general, speed can be okay, except for 12 seaters and big coaches. However, the situation gets far worse during Tet. I think coaches and minibuses should be monitored more heavily and kids on motorbikes should always wear a helmet.

Road accidents are a waste of life, and most of them are avoidable. And when we see an accident with serious injuries, we should stop, ask a passer-by for help, and take those involved to a hospital. Many are afraid to stop because they fear being accused of involvement in the accident.