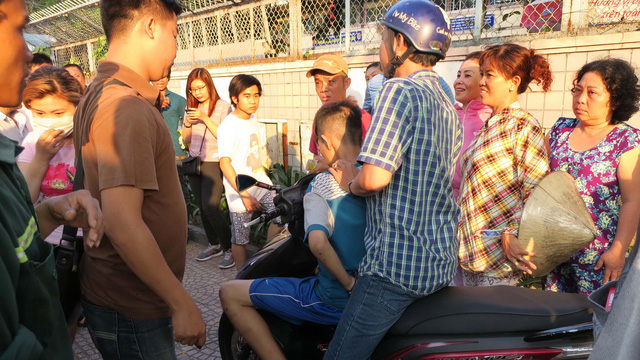 A number of expats having lived in Hanoi and Ho Chi Minh City for several years gave their opinions on theft and robbery in Vietnam as requested by Tuoi Tre News.

Some of the interviewees were themselves robbed.

I worked as a security consultant, and as a person who has worked in the protection of robbery of businesses for over 20 years in my home country, I see the rate of robbery on people and businesses in Vietnam as a moderate issue only. When we compare the number of robberies to that in other countries around the world, Vietnam does not have a high rate of robbery, either on local residents or tourists.

Fortunately, I have not been a victim of robbery in Vietnam. However, I used to run a restaurant on Bui Vien and have seen a number of robberies in and around the area. Phone snatching is a very common crime, especially on tourists. Also bag snatching from motorcycles has always been a common issue known by locals and international guests.

One particular crime targeted single Western men in and around the District 1 tourist area. It would usually have two females and two males. The beautiful women would see a man standing alone, especially near an ATM. They would see they have a wallet in their back pocket and a smartphone. The first woman would begin flirting with the Westerner before grabbing the Westerner’s body as the second one removes his wallet. The second woman got on a bike with a male and rode off. As the man turned to chase her, the first woman got on another bike and escaped.

I believe the Vietnamese government has done a lot to stem the growth of attacks on tourists and Westerns in Ho Chi Minh City. When I first came to the country six years ago, it was a real threat to be attacked whilst walking in the streets. Changes made by police have resulted in these crimes being a lot less frequent than a few years ago.

There are a few ways to reduce these crimes:

2. Don’t carry a wallet in your back pocket. If it is seen then it can be taken. Don’t show people where you keep your money.

3. Don’t carry a big handbag. Ladies who carry a large shoulder-type handbag are highly vulnerable to robberies. Leave all your stuff at home and only carry essential things in a small purse.

4. When walking always carry your belongings in the outside hand or outside pocket. By keeping your belongings away from the street you reduce the risk of a drive-by attack.

5. Don’t use your smartphone. You must remain vigilant of who is around you and who is looking at you. A thief will not attack you immediately. They will plan the attack. This means they will follow you for 3 to 15 minutes before attacking. If you are observant you are able to make changes to your movements and even take evasive action before a crime is committed.

6. There is a study that defines the anatomy of crime. A crime of any kind has three elements, including a way to commit the crime without being identified, something to gain from the crime (money, sexual gratification, etc.), ways to escape without being caught. Studies show that if you can remove one of these three items from a potential crime scene you will prevent a crime.

Crime and scams are a major deterrent for tourists. The reputation of a country's crime rates on tourists has the potential to crush the tourism of that country. Countries such as Egypt, Greece and Brazil have all been greatly affected by the reputation developed by robberies on tourists. As beautiful as these countries are, people refuse to visit them because they are aware of the extreme risk of robbery.

Overall I feel rather safe in Ho Chi Minh City but the police and community need to continue to be active to reduce the opportunity for robberies and punish those who commit them, especially on tourists.

Theft all over newsfeed

Living in Vietnam, while I feel safe from serious crime, one concern that is never far is the threat of theft. I can scroll my Facebook newsfeed and see motorbike thieves, dog thieves, and many creative scams. I myself also experienced a few small things like people trying to pick my pockets while another time I've come home late to a man trying to attack me and get into my home. Another time while driving home two men tried to threaten us with a knife (to cut the purse) and to my luck I hit the driver with a hamburger in the face and they fled.

I think there are many reasons and the factors are numerous but the simple answer is because they can. The thief will very rarely be pursued and they know that. When they do get caught they just have to apologize and pay a small fine. There is also the wealth gap which can easily make desperate people do desperate things.

Solutions for this are harsher fines, community service work programs, longer jail sentences, and rehabilitation efforts that include job training and work programs and subsidies for employers who hire these people who are coming back to society. Additional patrols by police in high crime spots/tourist areas would be helpful too. A poster campaign could be set up to let tourists know that they care and where they can go to report crimes. This will also improve the image of Vietnam as the public will be getting a message directly from the government instead of the 'Negative Nancies' on the Internet who suggest that people here don't care about theft. Last but not least, we can support people who are victims of theft instead of blaming them. I think when Vietnam tackles its theft issues we will see tourist rates at higher levels than ever before.

I can't speak for other cities in Vietnam, but theft and robbery in Ho Chi Minh City are a big concern of mine. One of the major reasons for theft and robbery in the city is because of the vast number of scooters and the ability to use them to flee the scene quickly. Even in my hometown of Manchester (London too), there has been an increase in the amount of theft and robbery involving a scooter, which allows for a fast getaway, up and down small streets and alleyways.

One night on Bui Vien, at 2:00 am, my girlfriend was almost a victim of a bag snatch from a scooter. Luckily, she turned away at the right time. The driver was out of sight within seconds. It happened so quick! Even in the daytime, I've also seen a Western woman have her phone snatched from a scooter, in Phu Nhuan District. Although most crimes against tourists happen within District 1, it can happen to anyone. Anywhere. Anytime.

The fact is theft using a scooter is an easy crime to commit and to escape from. In order to prevent these crimes from happening, we need to make it much more difficult for potential thieves. Educate citizens to avoid becoming a victim. Don't use your phone facing the road. Avoid carrying a single-strap handbag. Be careful of valuables when sitting at a café.

This particular crime isn't unique to Vietnam, but it will be more frequent due to the number of bikes, population density and people's lack of vigilance.

This issue has gone worse since the year I first came. I remembered walking in the middle of the night and feeling safe. Everything has changed. Now I’m always anxious about my surroundings. I feel like someone will take my belongings. It’s just not the same anymore.

The issues once happened to me around 10 years ago. I was on a motorbike when 2-3 guys nicked my bag with two cellphones and a passport in it. I think the authority should be more vigilant and the people must be aware and avoid flashing their belongings.